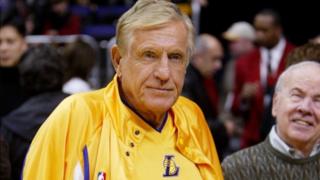 Actor and comedian Jerry Van Dyke, who won four Emmy nominations for his role in the US sitcom Coach, has died at 86.

His wife Shirley Ann Jones told US media he had died at his Arkansas ranch on Friday.

The actor's health had been waning since a 2015 traffic accident, she said.

After an early career in stand-up comedy, the junior Van Dyke turned to acting, appearing on The Dick Van Dyke Show in 1962 as the sibling of his real-life brother. He went on to appear regularly on The Judy Garland Show.

Some of his subsequent projects were mauled by TV critics – not least the fantastical sitcom My Mother the Car, a single-season flop that ran on NBC in 1965. Van Dyke played a lawyer who buys a car inhabited by the spirit of his dead mother, Gladys.

Van Dyke, who was happy to turn his sense of humour on himself, told the Associated Press in 1990: "When people talk about bad television, 'My Mother the Car' is the show that pops to mind…"

To balance the critical failures, the funnyman landed perhaps his best-loved role in 1989, as Luther Van Dam in the US football comedy Coach.

He played the assistant coach of the fictional Minnesota State University Screaming Eagles, and got four back-to-back Emmy nominations for Outstanding Supporting Actor in a Comedy Series from 1990-1993.

The Van Dykes played on-screen brothers well into their later years, with a 2015 turn in family sitcom The Middle. Actress Patricia Heaton, who played Jerry Van Dyke's daughter, tweeted a tribute to her "hilarious and terrifically talented" screen dad.

Much love to my wonderful TV dad #jerryvandyke and condolences to my TV dad-in-law #dickvandyke. Jerry, you were hilarious and terrifically talented – what an honor to be able to watch up close as you and your brother create your special magic. Rest In Peace Jerry… pic.twitter.com/O5Sx12vK3q

As well as his brother, the comedian is survived by Ms Jones – his second wife, a son and daughter from his first marriage, and two grandchildren.