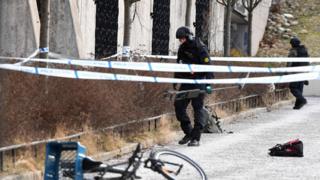 A 60-year-old man has died in the Swedish capital Stockholm after picking up an object outside an underground station which exploded, police said

A 45-year-old woman was injured in the blast, which police said was not believed to be terror-related.

Swedish newspapers Expressen and Aftonbladet reported that the device was a hand grenade.

The blast occurred at the Varby gard station in Huddinge, a southern suburb of the city.

The man died later in hospital. The woman suffered injuries to her face.

There was no indication the couple were targeted, police said.