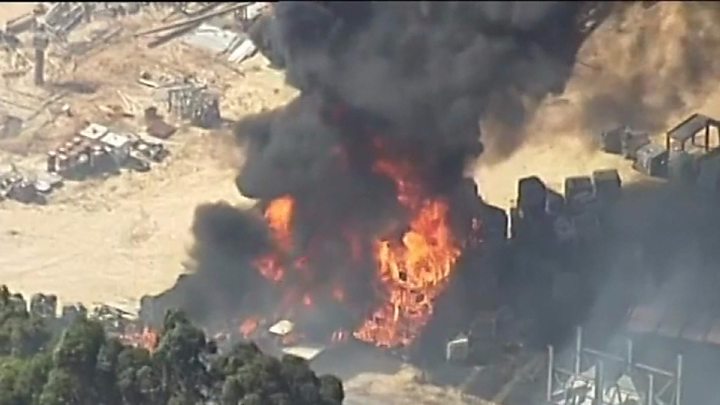 Sydney swelters on hottest day since 1939 as mercury hits 47.3C

The Australian city of Sydney has experienced its hottest weather in 79 years with temperatures in the region hitting as high as 47.3C (117F).

In Penrith, west of Sydney, residents sweltered as the town bore the brunt of the heat on Sunday.

Severe fire warnings were issued for the greater Sydney area and total fire bans were put in place across the city.

Sunday's temperatures fell short of the scorching heat to hit the area in 1939, when the mercury reached 47.8C.

The sweltering temperatures reached in Penrith were confirmed by the Bureau of Meteorology.

#SydneyHeat UPDATE: #Penrith has now reached 47.3 degrees at 3:25pm according to the preliminary live data from the weather station there.

ABC reported that one charity, Mission Australia, helped transfer homeless people to hospital for treatment while taking others into shelters to avoid the heat.

Bahar and Amir Kashefi tried not to let the heat ruin their wedding day in Sydney. "I'm sweating, my bridesmaid is sweating," the bride, Bahar, told ABC.

"I think I am going to cut the wedding short, go straight back to the hotel and jump in the pool."

About 7,000 properties across New South Wales were left without electricity, partly because of the heat, the Sydney Morning Herald reported.

At the Sydney Cricket Ground, England's batsmen struggled on the hottest day on record for a Test match in Australia.

Players participating in the Sydney international tennis tournament were forced off the court at 10:00 local time on Sunday (23:00 GMT Saturday) by the event's organisers after temperatures courtside exceeded 40C.

France's Kristina Mladenovic apologised after she retired midway through her match against Australia's Ellen Perez because of the heat.

"43 degrees but probably 50 on court when started," Mladenovic tweeted, adding: "I'm sorry to the fans, I think it's the first time in my career I retired [from] a match."

Journalist Jamie Pandaram also wrote on Twitter that the heat had prevented photographers from doing their work.

Heatwave update: world No.11 Kristina Mladenovic retired midway through her @SydneyTennis match due to heat stress. 3 courtside photographers' cameras shut down, takes 55 degree temps to do that. Outside temp recorded earlier was 44.5

The fire bans in place in the greater Sydney area on Sunday were imposed to reduce the risk of wildfires, which are common during Australia's arid summers.

Several blazes had already been recorded on Saturday, and a number of properties were destroyed in the states of Victoria and South Australia.

In September 2017, Australians were warned to prepare for a dangerous bushfire season after one of the driest winters on record.

More than 200 weather records were broken across Australia between December 2016 and February 2017, with heatwaves, bushfires and flooding throughout the country's summer season.

Experts have warned that land and sea temperatures have been affected by climate change, leading to more extreme weather conditions.

Monday's forecast for Sydney, perhaps unsurprisingly, is for more hot weather – and some rain later in the day.