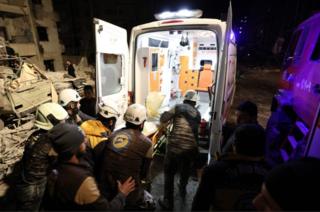 At least 23 people are reportedly dead and many more injured after a large explosion in the rebel-held city of Idlib, in northwestern Syria.

The UK-based Syrian Observatory for Human Rights said the blast struck the headquarters of a minor rebel faction.

Seven of the dead are believed to be civilians.

It is unclear what caused the blast in the city's Thalatheen district. Some reports suggest it was a car bomb, while others say it was a drone attack.

The Observatory, which monitors Syria's civil war through a network of sources, said rescue teams were working to recover the dead and wounded from the damaged building and nearby houses.

The rebel faction was named as the Ajnad al-Qawqaz group, which includes hundreds of Asian fighters.

It is fighting alongside the Fateh al-Sham Front, a former al-Qaeda affiliate, to repel a Syrian army offensive launched last year.

Idlib province, on the border with Turkey, is one of the last major strongholds of the forces opposing President Bashar al-Assad.

The Syrian army lost it to insurgents in 2015, when it became the only province under full opposition control.

The Syrian army and its allies have vowed to take back Idlib and the neighbouring Hama province.

Idlib has seen fierce clashes in recent weeks, as the army pushed to seize a pivotal road between Damascus and Syria's second city, Aleppo.