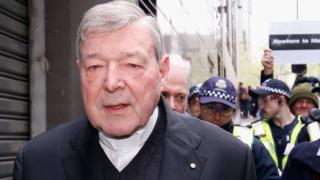 A man who publicly accused Cardinal George Pell of sexual abuse has died.

Damian Dignan, from the Australian city of Ballarat, died on Saturday following a long illness.

Cardinal Pell is on a leave of absence as Vatican treasurer to fight police charges in his native Australia. He has strongly and consistently denied any wrongdoing.

Mr Dignan's former partner, Sharon Rixon, confirmed his death on Facebook, describing him as her "best friend and the father of my children".

"It's hard to say goodbye, but [you're] pain free now and that's the best thing we could hope for," Ms Rixon wrote.

Last June, police charged Cardinal Pell with historical offences from "multiple complainants". He is due to return to a Melbourne court in March.

Cardinal Pell's lawyer has previously said he will plead not guilty to all charges. Details of the allegations have not been released.

A former Melbourne magistrate, Nicholas Papas, told The Australian newspaper that Mr Dignan's death could have ramifications on the court case.

"Normally it requires that the person who has given evidence to be there, and so normally it would be the case that without them there, the prosecution can't proceed… but you can't be absolutely sure," he was quoted as saying.