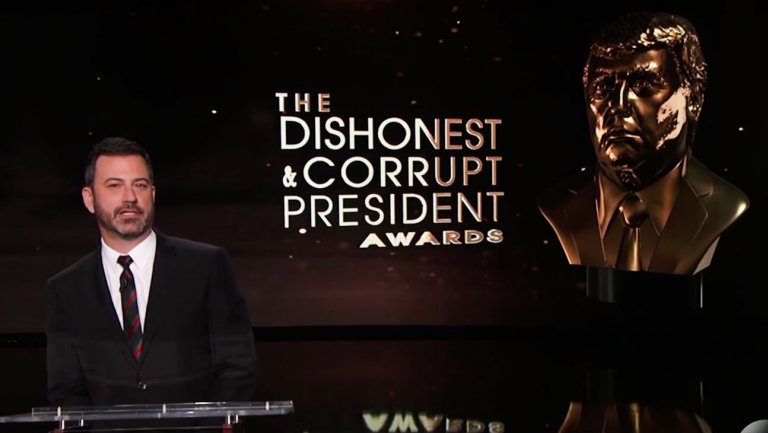 Stephen Colbert argued the event was "overhyped," whereas Jimmy Kimmel created his own ceremony dubbed the "Dishonest and Corrupt President Awards."

Though late-night hosts created their own campaigns to be considered for the “Fake News Awards” that President Donald Trump held Wednesday, none of the late-night shows received a win, leaving the hosts to address their losses during their Thursday night shows.

“I’m sad to say The Late Show was snubbed. … But at least, for once, we didn’t lose to John Oliver,” Stephen Colbert said during his opening monologue, also revealing how surprised he was that their aggressive campaign didn’t secure a win, despite creating a billboard for Times Square. “We just assumed Trump would see it because Times Square has his two favorite things: Fast food and a hint of urine.”

Colbert proceeded to explain how “overhyped” and “underwhelming” the awards show was. “When you clicked the link, it took you to the GOP website which said ‘404 Error.’ Yes, presidency not found,” Colbert joked. Attempting to investigate the website crash, Colbert showed a clip from one of Trump’s speeches where the president explains that he hires people for only $3 to create a website for him. “You were overcharged,” Colbert quipped.

After the New York Times’ Paul Kruger took the winning spot in Trump’s awards, Colbert explained why he disagreed: “Damn, I really thought it would be Lady Bird. It’s a good movie.” Colbert also argued that Kruger shouldn’t be the winner, for he’s an opinion writer and is currently "juicing.”

Over on Jimmy Kimmel Live!, Kimmel decided to “extend the same honor” to the president and create his own award show, on behalf of the media, dubbed, the “Dishonest and Corrupt President Awards.”

Kimmel then proceeded to name each category and the winners, including best fabricated numbers, best self-proclaimed best-ness and outstanding achievement in Obama fiction.

In the category for Trump’s “least convincing display of love,” Kimmel named the “Mexican people” as the winner. Meanwhile, Trump claiming Obama was the “founder of ISIS” was crowned the winner for the president’s best “Obama fiction.”

On The Opposition, Jordan Klepper sarcastically praised the president for creating an awards show “not all about politics.” With the website immediately crashing soon after publishing the winners, Klepper joked that was part of a strategic plan. “My boy’s smart, you know? Keep ‘em hungry.”

After Klepper mentioned that a number of Trump's winners already retracted their stories, the late-night host joked, “Nice try, media. You can’t hide your mistakes by fixing them immediately and apologizing. Apologies are for suckers.”