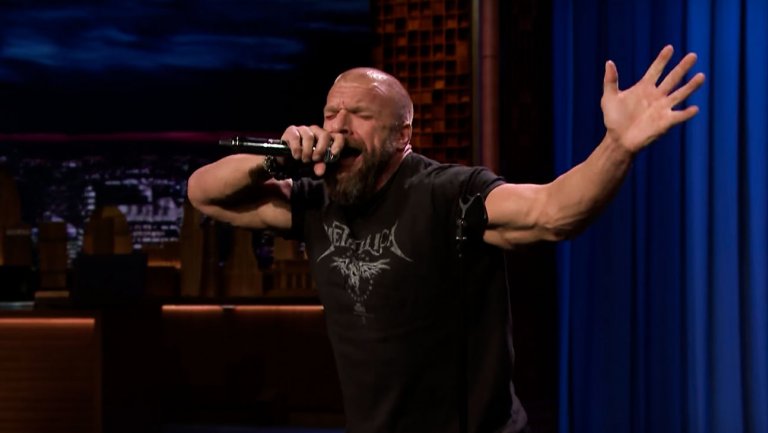 Jimmy Fallon and WWE stars The New Day faced off against the burly wrestler and Stephanie McMahon in a special tag-team edition of the popular sketch.

It was a lip-sync showdown on The Tonight Show on Thursday as the WWE's Triple H, Stephanie McMahon and The New Day squared off for a special tag-team version of host Jimmy Fallon's popular segment.

The New Day was up first, teamed with Fallon, in a contest with high stakes: If Fallon's team lost, the host would show up at the Barclays Center in Brooklyn for WWE Raw's 25th anniversary show. The songs in question for Fallon and crew were Boyz II Men's "Motownphilly" and Phil Collins' seminal 1985 classic, "Billy Don't You Lose My Number," the latter of which elicited a refrain of "Who?" from The New Day.

But they didn't have to find out, as the spinner to decide which song the quartet would perform landed on Boyz II Men.

In spirited fashion, The New Day broke from a huddle and launched into harmony, joined shortly thereafter by Fallon.

The bar had been set high for Triple H and McMahon, who stepped forward for their turn. Triple H had chosen "Seek and Destroy" by Metallica as his preferred song of choice while McMahon chose the lighter fare of "How Far I'll Go" from Disney's Moana. To the delight of everyone in Studio 6B not named Triple H, the spinner landed on the latter of the two song choices.

The song kicked in and McMahon took the stage, pretending to belt out the inspirational hit's first verse. As the tune crescendoed into its rousing chorus, Triple H took her place and, with arms outstretched, treated the fans to an uplifting performance that included a twirl around the microphone stand.

Fallon and The New Day's performance was no match for a skipping Triple H, it seemed, and the crown of tag-team lip sync champion went to McMahon and her partner. See you on Raw on Monday, Jimmy.

Watch the video below.