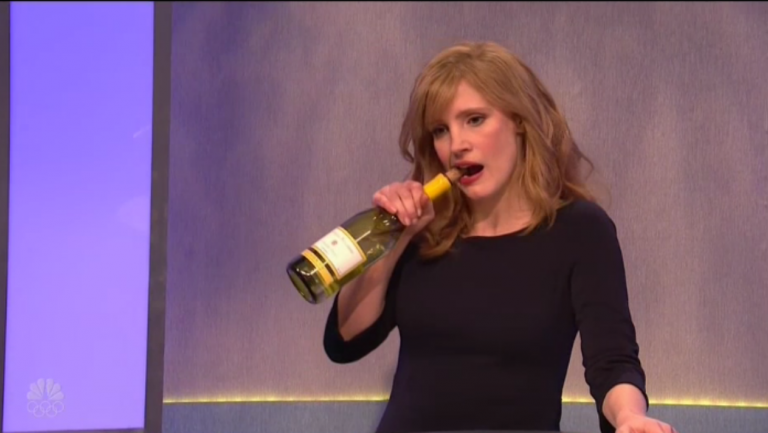 In a spoof of 'Jeopardy!', the host posed various actions taken by the president to contestants and asked whether it could endanger his presidency.

On the latest Saturday Night Live, host Jessica Chastain played the on-edge host of a Trump-era game show called What Even Matters Anymore?, in which she asked contestants about various actions taken by President Donald Trump and every right answer was "It doesn't even matter anymore."

In a spoof on Jeopardy!, Chastain played Veronica Elders, the host of a game show "where I tell you what the president did or said and you have to tell me, does it even matter anymore?" she told the three contestants, who had to press a button to be the first to answer each question.

Then Veronica asked a hypothetical question that hasn't happened: "The president fires Robert Mueller, the very man investigating him for treason. Does it even matter anymore?" When a contestant pointed out that the premise wasn't true, the host snapped back, "He will!"

"The president builds a wall but hires illegal immigrants to build it and he accidentally puts an unlocked door every 10 feet. Would that matter?" she asked, looking increasingly wild-eyed. One contestant told her he was "sensing a pattern," and so answered "no."

In the final round, the host asked contestants to imagine scenarios that would matter. When her answers to premises like Trump punching the pope and canceling the Olympics because flags are "gay" still turned out to be "no," the contestants broke the fourth wall and asked Chastain if she was all right. The game ended in a hug.

The actress also appeared on Saturday's episode as a contestant on a Bachelor-like contest called Car Hunk, where she played a woman who was flustered by the titular hunk's dates and said that she was the inventor of "eating Tide pods."

In a spoof of the opening sequence of the Fresh Prince of Bel Air, Chastain played a federal agent who tried to help the skit's version of Will Smith escape a gang he was in trouble with, until she double-crossed him.

And in a skit parodying live-streamed seminars, Chastain played the host of a "Google Talks" segment on bullying with a thick Valley Girl accent.

Prior to her hosting duties on Saturday, Chastain revealed that she was nervous about the gig, but also shared the advice that Wonder Woman actress Gal Gadot and comedian Amy Schumer had given to her before, on The Tonight Show With Jimmy Fallon. “Gal said that it should be fine for me because English is my first language,” she told Fallon. Chastain also said that Schumer told her, "Just make sure you play everything super-serious, like your life depends on it." Last week's host Sam Rockwell, she added, told her to stay hydrated.