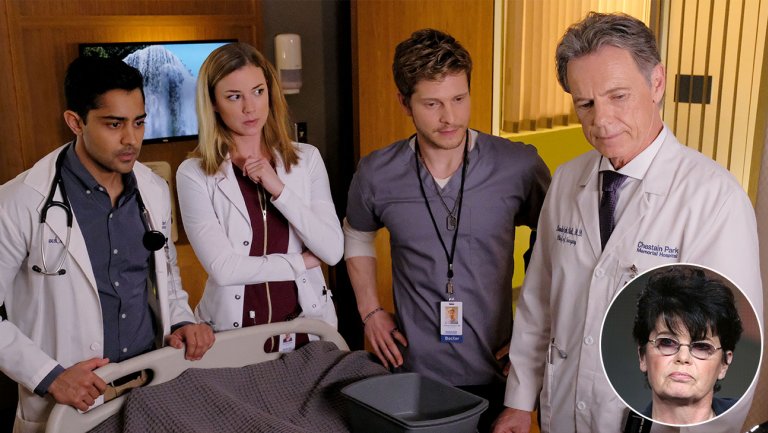 'The Resident' Co-Creator Amy Holden Jones: How I Made It in Hollywood

The screenwriter behind 'Mystic Pizza' and 'Indecent Proposal' looks back on her early days working with Martin Scorsese and previews her latest foray into television.

She may not be a household name, but Amy Holden Jones has carved out a successful career as an editor, writer and director of feature films for over two decades. After getting her start as Martin Scorsese's assistant on Taxi Driver, she made a name for herself as a screenwriter on Mystic Pizza and Indecent Proposal, and then made the jump to television in 2014, creating the short-lived ABC drama Black Box. Now she returns with The Resident, an upcoming medical drama on Fox starring Matt Czuchry and co-created by Dr. Roshan Sethi and Hayley Schore.

Ahead of the show’s premiere, Holden Jones spoke with The Hollywood Reporter about her journey from Corman factory neophyte to TV showrunner.

I got interested in photography after my sophomore year [of high school]. I wanted to study photography with Minor White. He taught at MIT, and I couldn't make their science requirement. Through Wellesley [College] you can take half your classes at MIT, so I went to Wellesley and took all my film and photography classes at MIT. I discovered the documentary filmmaking department after I got there, but I had made films in high school on my own.

At that time, the AFI Student Film Festival was one of the only ones. There were three judges: Fred Wiseman, Eleanor Perry and [Martin] Scorsese. I won [with the short documentary A Weekend Home], and a year later I was trying to make a living in Boston in documentaries and it was still the day of film, and it was pretty much impossible because any documentary shot on film cost a great deal of money.

I was gonna go back to graduate school, and I read an article about Marty starting a new picture, so I just wrote him. "Do you remember this film? Would you advise me to move to New York?" And he called me five days later and said "I remember the film, and come meet me in New York." And he hired me on Taxi Driver as his assistant. I was living on various sofas of friends' apartments and going to Warner Bros, and I got to see all the cuts of Taxi Driver, all the way from three and a half hours to the final cut.

Marty advanced my career again because he said to me, "OK, you're too good to be an assistant.” Everyone started with Roger Corman, and Scorsese had too. And Roger called him and said, "I'm looking for a talented, inexpensive young film editor." Joe Dante and Allan Arkush did a feature together called Hollywood Boulevard for Corman, and they hired me to edit it.

I ended up editing Corvette Summer, which was edited at Lucasfilm. So George Lucas and Spielberg saw all my cuts. And after that I was on the road to becoming a big editor. I picked the wrong [movie], I picked a Hal Ashby picture [Second-Hand Hearts], which was the only really unreleasable picture he ever did. I was on that for a year and a half and learned every trick in the book of editing from Hal, who was an editing genius. But I knew then I couldn't stand being an editor, because you could make it better, but it wasn't yours.

I went back to Corman and said, "I want to direct." And he said, "You have to show me you can do it." So I took a script off of his shelf that he had never made called Don't Open the Door written by Rita Mae Brown. It had a prologue that had an action scene, a dialogue scene and a suspense scene. I shot it with a crew of four people on 35mm film.

By that time I was supposed to start cutting E.T. for Spielberg, but it was being pushed back because Poltergeist was way over schedule. And Roger suddenly said, "Finish this movie.” I made the very crazy decision of walking away from E.T. and doing Slumber Party Massacre, which I have actually never regretted.

So I sat down and wrote Mystic Pizza. Ultimately it was optioned by Samuel Goldwyn Jr., who held onto it for many years claiming that an option for $5,000 gave him the rights to it for the rest of my life. So while that went on, I rewrote and directed Maid to Order with Ally Sheedy, and again I got offered nothing. And I'm saying not one single meeting. Meanwhile, people like my apprentice editors were directing movies, who were men.

[Goldwyn Jr.] ultimately did make Mystic Pizza with a male director. It didn't actually do that well in release, but my version of the script had been incredibly well known and I began to get writing offers. The next one that I took was Indecent Proposal. It made me a big-name screenwriter in the era where you could make a great deal of money as that. And women were acceptable in that role, so you could get hired.

I was watching great television shows, and I thought, "This is a challenge, this is different." I read a bunch of [TV pilots], and I pitched one [called The Seventeenth Floor] to ABC, NBC and CBS, who all tried to buy it. I did write that script for CBS, it was a combination of a detective show and a medical show.

Then I did one for the WB, which folded over to the CW, which was about Harvard Medical School. That one [HMS] did get shot. It didn't get picked up, but it turned out beautifully and tested higher than any CW show they had. They picked up a cheerleading show, predictably enough.

Then I did Black Box. I'm very proud of that show, but I did not know a lot of things at the time. I was still learning about how things get on television, oddly enough. One problem was it was a summer show, and summer shows don't work anymore. And two, it wasn't ABC Studios. And the television networks, all of them, almost exclusively now make shows from their own studios. So you've just made the mountain even harder to climb.

I got very lucky on a whole number of fronts, but the luck didn't fall out of the sky. I try to explain this to people who I try and mentor. You have to deliver. I did make a documentary that won a festival. I did take that reel into Roger. I did a good job on Corvette Summer in front of people who could [help me].

[The Resident] has been something I've been trying to do in different forms for a long time. I got tired of writing medical shows because the ones on television are virtually the same show. They're all soaps, they're all spinoffs of Grey's or ER, they are shadows or echoes of previous shows. Virtually none of them address what any of us will find if we actually fall into the medical system. This show does that. It's about the idealism of the young doctors as they come in. How do you become a doctor without losing your ideals? Because it's a very corrupted system.