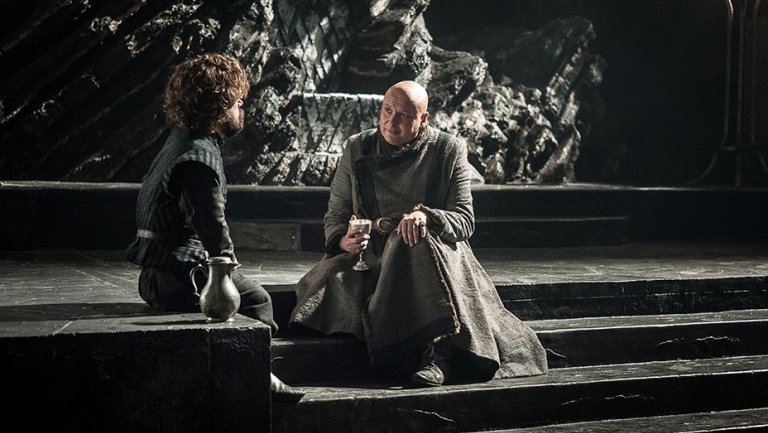 This week's 'Winter Was Here' podcast focuses on season two, episode eight, 'The Prince of Winterfell.'

[This story contains spoilers through seven seasons of HBO's Game of Thrones.]

Everybody remembers "Blackwater," the climactic penultimate episode of Game of Thrones' second season: Bronn (Jerome Flynn) launching an arrow into the sea and triggering a roaring display of florescent green wildfire, Stannis Baratheon (Stephen Dillane) furious and filled with failure as he fights to seize King's Landing, an axe falling upon Tyrion Lannister (Peter Dinklage) and leaving him scarred forever — just to name a few moments.

But who remembers the events of "The Prince of Winterfell," the episode right before the battle of "Blackwater," and the quietly critical moment surrounding Tyrion and Varys (Conleth Hill), the men at the heart of one of the show's very best friendships? When they first met earlier in season two, Tyrion and Varys were at odds at best, threatening each other with knowledge of the other man's secrets. But with the imminent threat of Stannis coming closer and closer to King's Landing with every passing minute, Tyrion and Varys finally figure out what should have been obvious all along: these brilliant minds are much better working with one another than against one another.

Deciding they should have a conversation as "two honest and intelligent men," Tyrion and Varys have their first fully sincere discussion while staring out at the Blackwater Bay. For the first time since his arrival in King's Landing, Tyrion confesses that he's more enamored with his role as Hand of the King than he ever imagined — and what's more, he's good at the job, as Varys volunteers of his own volition, praising the "highborn plumber." Their bonding moment even ends with a glimpse into the future: a quick check-in about whispers from "the edge of the world," about a certain Targaryen exile with three dragons at her disposal.

"It'll be years when they're fully grown," Varys tells his new (and future best) friend, "and then there will be nowhere to hide."

"One game at a time," replies Tyrion, the man currently serving as his hated nephew's Hand of the King — and eventually, the man who will serve as Hand to the Dragon Queen.

Here's what else we discussed about "The Prince of Winterfell" this week on "Winter Was Here," our Game of Thrones rewatch podcast from Post Show Recaps hosts Rob Cesternino and Josh Wigler:

• Much like Tyrion and Varys' friendship, an unlikely bond begins to form between a different Lannister sibling and a worthy adversary of his own;

• How Arya Stark (Maisie Williams) lays track for her eventual affiliation with the House of Black and White;

• The secret fondness Yara Greyjoy (Gemma Whelan) has for her brother, and what it might mean for the final season of the series;

And if you missed it, tune into our recap of season two, episode seven, "A Man Without Honor," below: