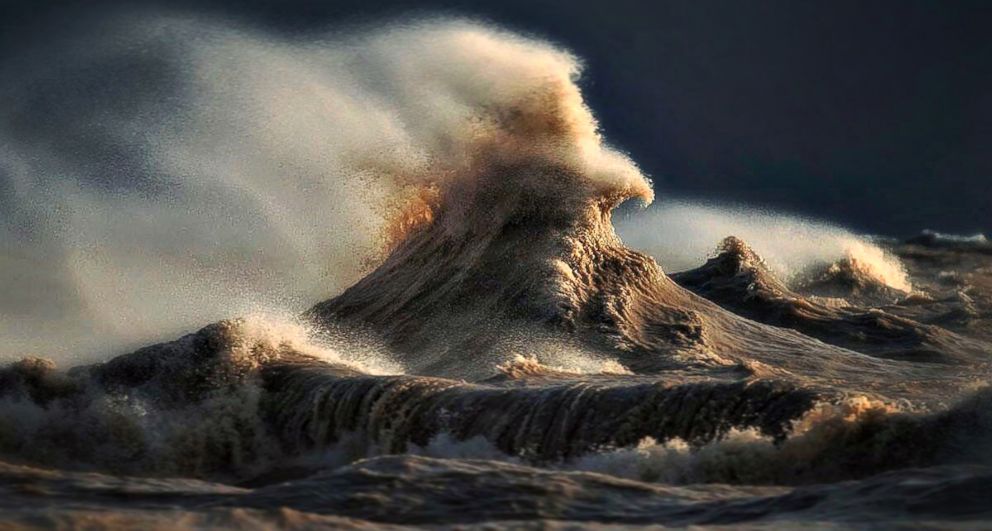 The cold and windy days of late autumn and winter transform the Great Lakes into what Canadian photographer Dave Sanford calls "wickedly wild and treacherous bodies of waters."

Sandford has worked to capture the ocean-like waves created by winter storms in Lake Erie in his photo series "Liquid Mountains." Sandford began the series in 2015 and, when conditions are right, he continues to add to it.

The strong winds on the Great Lakes are often referred to as the "Witch of November," according to Farmers' Almanac and local residents. The winds rage from mid-October through December and often into January as the cold, dry air from Canada mixes with the warmer, moister air moving north from the Gulf of Mexico over the lakes, according to the National Weather Service.

"The cold zaps your muscles," Sandford told ABC News. "I might last an hour to an hour and a half in the water before I’m too fatigued to carry on."

When the cold water gets to be too much, he said he positions himself on shore near the village of Port Stanley in Ontario, Canada. During the Great Lakes' storm season, water temperatures can fall to 33 to 34 degrees Fahrenheit (close to freezing), according to the National Weather Service.

The waves usually break 300 to 500 feet offshore, creating huge "explosions" up to 20 to 25 feet high, according to Sandford.

"All that energy has nowhere to go but up," like a "sea serpent rising," thanks to shallow water that produces the waves, he said. On the days he shoots, the winds average 44 to 50 mph, he said. He considers it a great shooting day if the wind speed hits that with gusts upward of 68 mph.

Sandford said it's extremely difficult to photograph the water while trying to maintain his footing, keep water off his lens and not have anything hit him. It’s extremely important for him to always have a feel for his surroundings, he added.

Sandford faces threats from rip tides and floating wood or chunks of ice that form later in the season.

"Ice is the most treacherous," he said. "I’ve only been in the water twice when there were ice floes." He told ABC News that he has seen pieces as large as a basketball. "It hurts when they hit you…. The last thing you want is to take a chunk of ice in the head," he said, adding he usually wears a wakeboarding helmet when he’s in the water.

Just how treacherous the Great Lakes can be is evidenced by the existence of numerous shipwrecks. Georgann and Mike Wachter, authors of "Erie Wrecks East," have documented about 350 so far in Lake Erie, the shallowest of the lakes. They estimate that a total 2,200 to 2,500 wrecks exist.

Before 2015, Sandford earned his living as a sports photographer. His pursuit of the perfect moments of Lake Erie’s waves has transformed his career and he now works primarily as a nature and wildlife photographer, he said. In the past two years, he has led ocean expeditions to the polar regions and worked with a shark diving company.