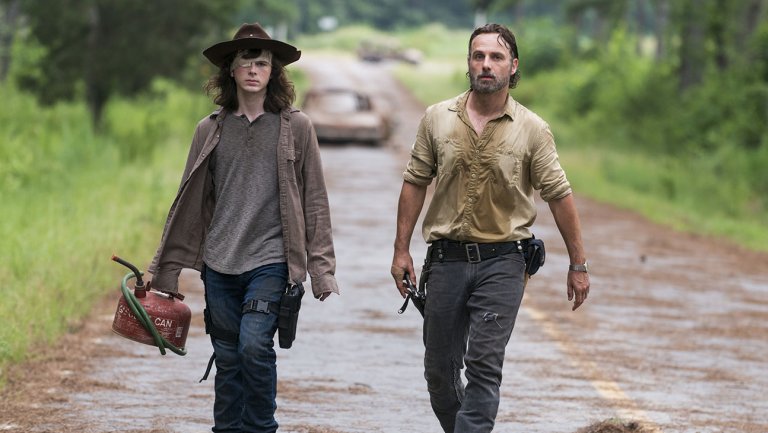 The AMC zombie drama is killing off one of its few remaining original stars when the show returns.

[This story contains major spoilers from The Walking Dead season-eight midseason finale, "How It's Gotta Be."]

The Walking Dead is devoting extra time to saying goodbye to one of its original stars.

When the AMC zombie drama returns Feb. 25, the eighth midseason premiere will run for 82 minutes, The Hollywood Reporter has confirmed. The extended run time marks the veteran series' second-longest Sunday showing in recent years, behind season seven's "Service," which ran for 85 minutes.

The extra-long episode follows the biggest shocker in The Walking Dead's 100-episode-plus history. The midseason finale, which aired Dec. 10, set the stage for the unforeseen death of Carl Grimes, Rick's teenage son who has been played by Chandler Riggs since the show's pilot. The final moments of the episode (which also ran over its 60-minute slot) revealed that Carl had been bitten on the ribs by a walker during an attack that happened a few episodes prior.

The moment delivered the biggest deviation from the comic book source material to date, where Carl had otherwise been deemed untouchable. Riggs confirmed after the cliff-hanger finale that the revelation will indeed bring about the end for his character on The Walking Dead.

"Yes, Carl is going to die," the 18-year-old star, who was 11 when the show began, told THR in an exclusive interview. "There's no way he can get back from that. His story is definitely coming to an end."

THR reported that the midseason premiere, episode 809, will be Carl's sendoff. The emotional episode will see Rick, Michonne (Danai Gurira) and the rest of the core Alexandrians watch as the younger Carl dies before them.

"I always thought Carl was going to be the one who led the show forward; that Rick would hand over his boots and revolver when he walked off into the sunset in season 28," leading man Andrew Lincoln told THR. Adding, "This is the biggest death [of a character] we've ever had and probably ever will have, actually, if you are a comic reader and realize the importance of Carl in the comics."

One day after initiating the shock wave of events, showrunner Scott M. Gimple wanted die-hard viewers to know that the game-changing death will serve a larger purpose on the series, which has already been renewed for a ninth season.

"It's all having to do with the greater story of the season," he told THR. "It will be very apparent, the relationship of this awful incident — this very intense story turn — to the greater story. I don't even need to answer because I know as you're watching it into the next half of the season that you'll get it. It has everything to do with what happens throughout the rest of season eight."