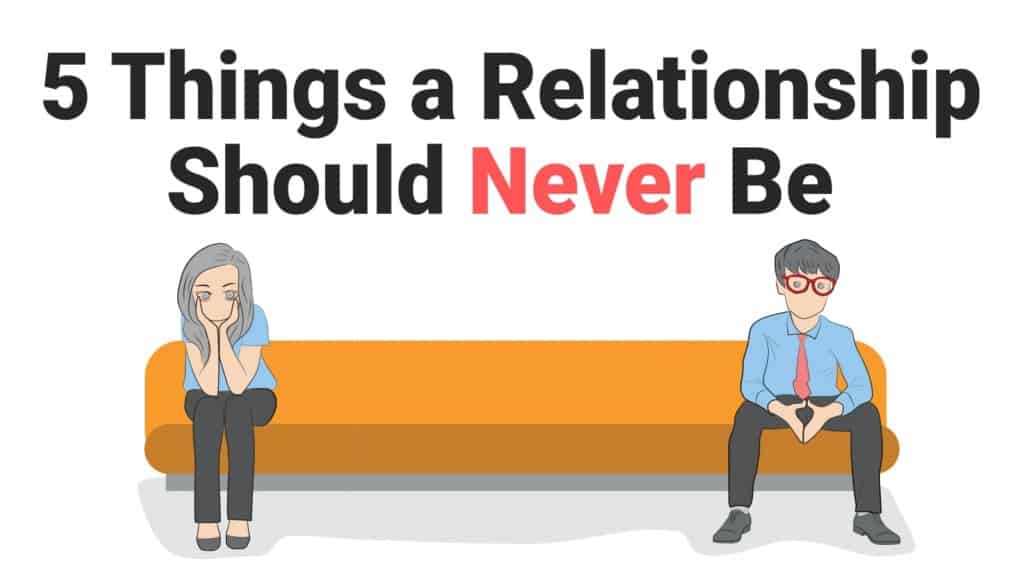 Let’s first talk about what a happy relationship is not, namely perfection. Even as adults, we have a remarkable tendency to stereotype. Let’s elaborate on stereotyping in the context of the “perfect relationship.” (Uh-huh…)

Consider the last couple you saw who looked visibly happy – like they knew some well-hidden secret that you didn’t.

Sure, you see playfulness, laughter, and affection – and most of it, if not all, is likely genuine. But what don’t you see? The ugliness. The arguing, complaining, and fighting. The screaming, shouting, and separation.

Nobody wants to display the ugly stuff. But it’s there for 99.9 percent of us in long-term relationships. It’s not visible, but it’s present. It may vary by degree but not in ubiquity.

A happy relationship is not anything close to a perfect relationship. Read that again, if you must.

A happy relationship involves two people who are – for the most part – satisfied with themselves and each other. They’re compatible and, yes, enjoy the occasional moment of glee and joy. It is the last feature of a happy relationship that involves certain “secrets.”

“But in [the] day to day lives [of happy couples], they … hit upon a dynamic that keeps their negative thoughts and feelings about each other … from overwhelming the positive ones. They have [an] emotionally intelligent marriage.” – John M. Gottman (source)

Forget Dr. Phil (do yourself a favor). John Gottman is the preeminent mind in the field of marriage science today, perhaps ever. Especially if the subject revolves around keeping a couple together and happy.

Gottman – along with his research partner, Robert Levenson – began conducting relationship research over 40 years ago. It was one particularly noteworthy study that garnered widespread attention from relationship experts – a 15-minute observation where Gottman and his colleague sat back and watched couples trying to resolve some kind of conflict in their relationship.

In that brief 15-minute period, Gottman was able to predict the occurrence of eventual divorce in an astounding 90 percent of the cases. For emphasis: out of every ten couples who eventually divorced – who, by the way, came to Gottman with “some kind” of relationship conflict (note the ambiguity there) – the man was able to confidently point and say, “Yep, they’ll be divorced,” for nine of them.

What, specifically, did Gottman see that could account for such a remarkable number?

How each couple handled conflict.

“If there is one lesson I have learned from my years of research, it is that a lasting marriage results from a couple’s ability to resolve the conflicts that are inevitable in any relationship.” – Dr. John Gottman

There better be some serious (and provable!) knowledge when someone claims a “magic ratio” that all but guarantees relationship happiness. This skepticism is certainly understandable. After all, nearly one in every two marriages in the U.S. ends in divorce.

Fortunately, Dr. Gottman and his colleagues at the Gottman Institute have backed up their claims with exceptional research.

It all started when Gottman teamed up with Levenson at Indiana University in 1980. First, the duo studied the interactions of thirty married couples and was able to prove that relationship satisfaction is tied to a couple’s physiological responses toward each other. The validation of these initial studies led to the “Magic Ratio” studies.

In 1983, Gottman invited 79 couples of different ages into his observation lab. The goal: to predict behaviors or processes that led to divorce. Checking up on these couples four years later, Gottman was able to confirm his initial hypothesis: those who poorly handle relationship conflict are much more likely to get divorced.

These findings ultimately led to the “Magic Ratio.” According to Gottman, successful couples have five positive interactions for every one negative.

As is apparent by now, couples whose relationship thrives engage in conflict differently than other, less successful relationships. Gottman calls these folks “Masters of Marriage” – and they have two things in common: (1) they gently approach conflict, and (2) they’re more proactive about reconciling differences.

In other words, it all comes down to how the man and woman handle conflict that makes the difference between a successful relationship and one that ultimately fizzles out. They have more positive interactions than negative. Hence, the 5-1 “magic ratio.”

Here are five of the positive, “secret” interactions that happy couples engage in:

Empathy is an incredibly deep form of human connection. Empathizing with your spouse during or after a conflict lets them know that you know how they are feeling and thinking. Simple expressions of empathy can go a long way – a simple nod or slight smile, for example. Verbalizing empathy is also important. Saying something like, “I understand how you feel” or, “It’s understandable why you think this way…” can work wonders.

Again, empathy is a profound relationship skill capable of both solving and healing conflict. More importantly, expressions of empathy reinforce to your partner that you’re both on the same team; some conflict, no matter how bad, doesn’t change that.

Playful behavior can be a wonderful asset – even during times of conflict – to ease tensions and lower defenses. The telling of inside jokes, says Gottman, can be particularly effective during times of heated conflict.

Of course, cracking jokes and otherwise being silly must be done skillfully and compassionately. Otherwise, one risks offending their partner or complicating an already uncomfortable situation. In other words, play around, but make sure such play is appropriate for the scenario.

Paying attention to what your partner says is always important (don’t shake your head!), but never more so when things have gotten serious. Too often, we tend to become defensive and emotional when stressed. When we’re not seeing eye to eye with the husband or wife, we should kick this emotionality to the curb and invite in logic and an even head.

Paying attention to what your partner says – whether its something that you agree with or not – is a token of love and respect. Keen attention is crucial during times of conflict to avoid misunderstanding and potential escalation.

As mentioned, happy couples are better at taking a proactive approach to resolving conflict than less-happy couples. Seeking agreement accomplishes two things: (1) it expedites the end to an ongoing conflict if there is one, and (2) it encourages intimacy by bringing both heads together to solve a problem.

Seeking agreement is often as simple as one half of the relationship saying, “Enough arguing, let’s figure this out.” Of course, this may require one person to swallow their pride for the good of the relationship. As we all know, this isn’t always easy to do amid a heavy conflict!

Speaking of something not easy to do mid-conflict. How about showing a bit of affection? While this may (okay, does) feel a bit awkward at times, it can bring a brisk end to any conflict; or at least make a resolution more likely.

Giving affection when times are tough is an act of courage and loyalty precisely because it’s hard. This added difficulty also makes such an act all the more special and rewarding. So, next time a conflict arises, try holding your partner’s hand, sneaking up behind them for a kiss, or simply saying, “I love you.”

Final Thoughts: Be Hopeful (and Don’t Fall For Quacks)

It’s always nice to share tips of happy, successful couples, particularly when they come from a brilliant pioneering mind like Dr. John Gottman.

But one of the more important messages by Gottman that isn’t mentioned as much is that many marriages are salvageable even when they seem hopeless. In this respect, Gottman, recommends seeking out relationship advice that is rooted in evidence and has been put into practice.

Therein lies a critical point: relationship advice rooted in evidence and put into practice. Some relationship “experts” – including some therapists – pay no mind to such details.

Evidence-based outcomes are incredibly important in the fields of psychology and therapy. There are plenty of people out there who would love to take your money for some “feel-good” advice that, while it feels good, isn’t worth a damn.

For example, the writer gently jabs at Dr. Phil earlier in the article. There is a good reason. Dr. Phil, while moderately entertaining and seemingly affable, is an entertainer whose therapeutic advice is often criticized by his colleagues in the mental health community. Dr. Phil’s (allegedly) misguided advice is especially troublesome when one considers that his show is seen by millions of people all over the world.

While you (thankfully) won’t check Dr. Phil’s availability any time soon if you choose to seek out help for your marriage, do yourself and your relationship a favor by ensuring that the individual holds the proper credentials. Marriage and family therapists (MFTs) are licensed mental health professionals in the United States.

Among the licensure requirements for MFTs are:

– A Masters-level education in marriage and family therapy.

– A period of supervised clinical experience (preceptorship, or “clinicals”)

– Passing of credential evaluation or a state-administered examination.

IcetruckJune 2, 2019
Like story:
tweet
10 Signs You Should Fight For A Broken Relationship
An Overview About Using Stamped Concrete For Your Home