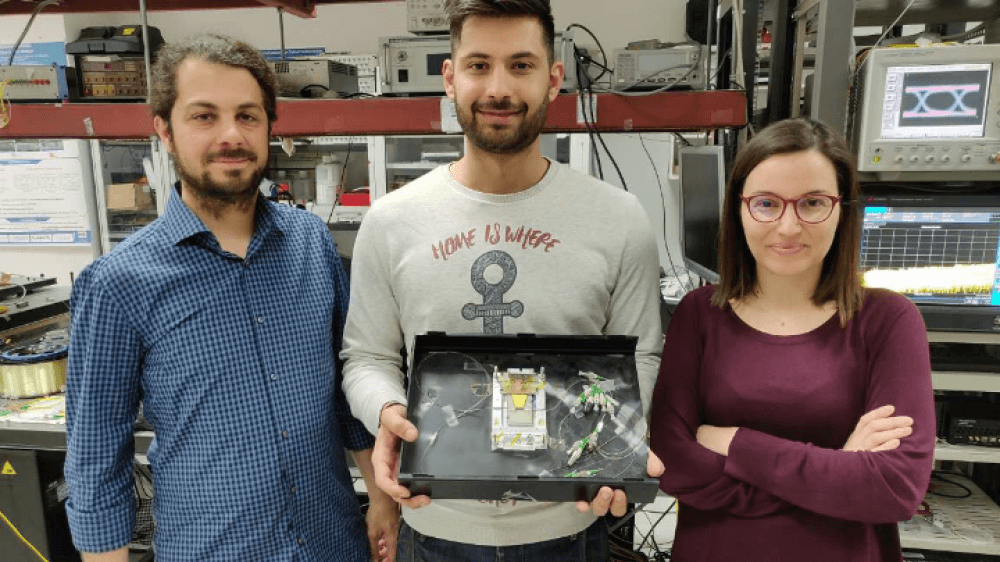 The fastest RAM in the world, which stores light instead of electricity, managed to create members of the Aristotle University of Thessaloniki’s Research Group of Wireless and Photonic Systems and Networks (ERAFOS). Researchers replaced the electronic memory with a corresponding Random Access RAM that supports 10Gb / s data read and write speeds (up to 10 billion bits in a second), achieving twice the speed of the fastest electronic RAMs built by world-renowned IT companies such as Intel and IBM!

The scientific achievement, which is a product of a long-term effort of the AUTh research team that started in 2009, solves a long-standing problem of computers, also known as the “Memory Wall”. According to this, the random access RAM speeds increase for more than 30 years at a much slower rate than the corresponding processor speeds, resulting in an ever-increasing gap between processor performance and RAM, as the processor it will have to “wait” to receive data from the slow memory, so it can not process it quickly and delay the other processes.

The “heart” of the RAM consists of fast optical switches, the equivalent of electronic transistors in photon technology, interconnected in a standard two-state optical array, “0” and “1”, while a third optical switch controls whether the Reading or Recording function is performed. As the light can not be “encased” spatially and consequently stored as easily as possible in electrons and electronic memories, the research team has developed a technique that exploits two interdependent but different wavelengths: when the a wavelength dominates within the proposed memory device, then causes the other to remain off, thus assigning digits 1 and 0 to two different wavelengths, digital storage is achieved.

In the future, even better performance is expected, as the research team intends to study higher-capacity optical memories with multiple memory cells that exploit the different wavelengths of light.

IcetruckJune 12, 2019
Like story:
tweet
7 Essential Marketing Tips for Authors
5 Ways to Respond to People Who Violate Your Boundaries