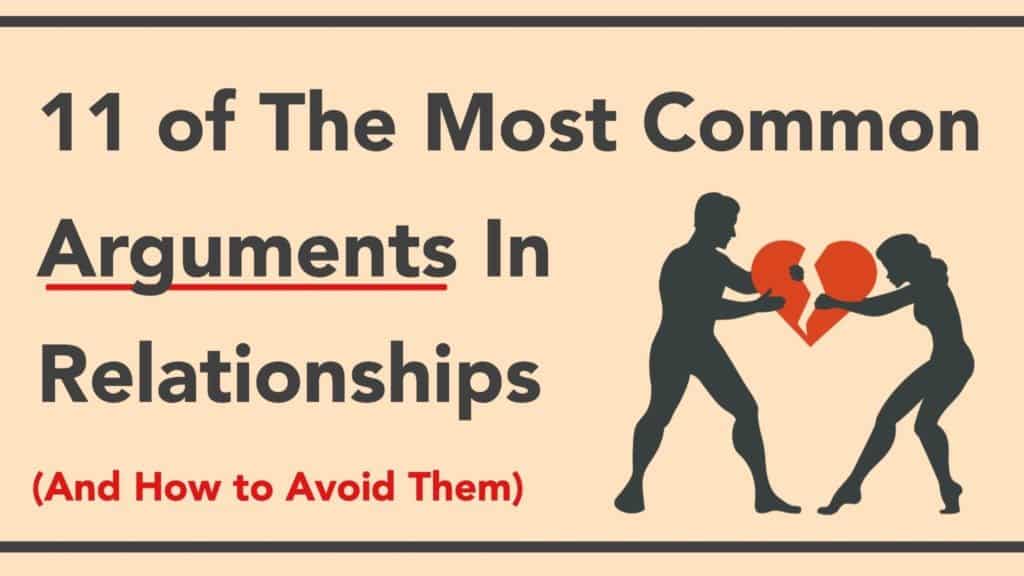 But when does an argument become a surefire sign of the end? When is fighting more negative than positive? You need to be aware of destructive disagreements that aren’t doing you any favors.

Here Are 10 Arguments That Signal The End Of A Relationship

A long-term relationship usually involves two people who both respect each other’s goals and desire similar things out of life. In committed relationships, a couple has usually already discussed where their lives together are heading. They have a general idea of where they want to be, and that future always includes each other.

But suddenly, you’re starting to fight over your life goals. Your ambitions don’t seem to match up anymore. You find yourself wondering if you even can still see your partner in your future ten years ahead. If those goals don’t align anymore, you may no longer be compatible. Some affected goals may be:

Long-term couples don’t need to have everything in common when it comes to their future plans – but they should share a similar overview or idea of where they’re going. No amount of positive thinking will help you if you spend ten more years with someone, only to find that you reach an impasse after you’ve sacrificed so much to give in to their goals. (1)

2. When You Argue Over Intimacy

Many people discount the influence of intimacy over the health of a relationship. But since good intimacy is often about good communication, if your bond is breaking down outside of the bedroom, it won’t be long until it falls apart within the bedroom, too.

It’s not unusual for partners to have different interests, kinks, preferences, and libido levels when it comes to intimacy. But when you start to argue about your differences in the bedroom, you’re heading right for Splitsville. This also indicates that at least one of you is unsatisfied physically, which is not healthy and can cause romantic relationships to feel platonic.

Intimacy should come naturally. Neither partner should feel forced or guilty regarding what goes on – or doesn’t go on – in the bedroom. If you begin finding fault with each other’s bedroom habits, you are no longer physically compatible.

Physical communication is just as important as verbal communication. If you find yourselves stuttering and struggling in bed, you may have overlooked some serious relationship problems everywhere else.

The way you fight can also be an indication that the end is nigh for a romantic relationship. Certain patterns of arguments, regardless of what they’re actually about, can be a big sign that it’s time to call it quits. Here are some examples.

Do your fights turn extremely unhealthy, to the point where you deviate from the topic at hand and start calling each other names, giving personal punches, or bringing up unrelated things from the past? You’re fighting in a toxic way and your respect for each other is slipping.

b) Fighting About Fighting

Do you have a problem with your partner’s tone of voice when you argue? Or maybe they find it annoying that you pace a lot? Do you argue because you shouldn’t be arguing? This type of fighting indicates that you are no longer focused on finding the really important issues. Instead, you’re finding fault in everything.

Some couples actively try to pick fights with one another. Often, it’s a cry for attention, or a way of seeking a change in a boring relationship, or a way to coax make-up intimacy or passion out of it.

Instead of picking fights, you should be talking about the things you want. If passive aggression and manipulation are how you’ve both decided to get it, your outlook is not so good.

d) Fighting For The Sake Of Fighting

Something small you don’t like that isn’t a big deal? Fight anyway. An offhand comment that could have been resolved with gentle communication? Fight anyway. If this describes your relationship, you’re heading down a dangerous path.

4. When All Of The Arguments Focus On One Person Changing For The Other

Self-improvement is fair game. Change is inevitable. But fighting about the fact that one of you needs to change is a very negative thing.

Are you being pushed to change yourself for your partner, or are you pushing them to change for you? That doesn’t bode well. When you first started dating your partner, you did it because you like who they are – so why are all those positive things not enough anymore?

If your partner is doing something bad or destructive, then you can talk to them about it. But at the end of the day, it is their responsibility to improve themselves, and you pushing them to improve more quickly is counterproductive.

5. When Your Focus Is On Being In The Right Or Winning

Arguments in a relationship shouldn’t be about winning or coming out on top. Instead, they should focus on solving the problem. It should be about the couple versus the issue at hand, not one partner versus the other.

The most important part of an argument is finding the root and working from there. If you’re more focused on getting the last word or winning, your arguments stop being about what matters and start being about pettiness and hostility.

Sometimes, you’re going to be the one at fault. In that situation, instead of being defensive, you should be apologizing and learning how to avoid a future situation. If you and your partner are incapable of admitting when you’re wrong, the relationship isn’t going to last much longer.

6. When You Argue Over Money

Money can be a bit of a touchy issue. Long-term relationships need to learn how to go from managing personal finances to managing joint finances. As such, it’s not uncommon for arguments regarding money to ensue.

The trouble begins when it’s impossible for either of you to agree on anything finance-related at all. You may disagree on the right ways to:

Whatever the source of the money argument, if you don’t sort out your money issues, the relationship is doomed to fail. Studies indicate that an inability to discuss finances in a positive way leads to a higher risk of divorce among married couples. (2)

7. When You Become Unable To See Their Point Of View

A relationship consists of two (or more!) different people. Each person is unique and has their own individual ideas, views, opinions, and values. They respond to things differently. They have varying preferences. A relationship requires mutual respect regarding these differences.

When you stop being able to empathize with your partner, the relationship is heading for an end. So, in the middle of a fight, if all you can think about is how what they’re saying doesn’t make sense and shouldn’t be taken into consideration, you’re running an unhealthy ship.

How often do you fight? Extreme frequencies can indicate the end of a relationship. The two possibilities are as follows.

a) Not Fighting At All

Sure, fighting is unpleasant. But what happens when those fights suddenly stop completely, even when there are things that you would normally fight about? This indicates that something is wrong. It’s avoidance, plain and simple – and avoidance is a big relationship-killer.

Fighting, in moderation, is healthy in a relationship. It can even lead to longer-lasting, more positive partnerships. It shows that you care, that you’re willing to hash things out to be together, and that you’re emotionally mature enough to tell your partner that something is bothering you. If you’ve stopped fighting, you or your partner may no longer think it’s worth the effort. (3)

b) Fighting Too Much

Fighting every single day? Every single hour? Barely get any chance to breathe before your next fallout? We’re not here to judge extremely passionate relationships, but in most cases, this type of intense fighting – especially when it’s a new development – is just not a good sign.

The same fight constantly recurring shows that the problem isn’t being solved and that neither party is putting enough effort to solve it. It shows:

When you have the same fight for the hundredth time, ask yourself – are you willing to be in a relationship where this problem never goes away? If you say yes, then move on and learn to accept this as a relationship quirk. If you say no, it’s time to call it quits.

10. When You Argue About The Spark Dying

Maybe your bond has been weakening. Perhaps you no longer feel happy around someone. Maybe the passion and romance have left. Maybe there’s no more spark.

This can be confusing for any couple. You want to feel something, and you want your partner to feel something – but there’s nothing there to feel. Many partners, perplexed and frustrated by this situation, begin to turn on each other, blaming each other in a desperate attempt to bring some life back into the romance.

Sadly, some relationships really do fizzle out, and it’s at no fault of either person. If you’re fighting because a spark is dying, chances are it can’t be ignited again and it’s the end of a relationship.

If you argue over these things, is it an automatic death sentence to your relationship? No, of course not! That’s not how arguments work. But they can be a sign that you’re heading down a destructive path and need to turn it around, fast.

So if you want to save your relationship, be on the lookout for these 10 arguments that signal the end of a relationship. Once you notice them, talk to your partner and find ways to work them out. With positive thinking and dedication, there’s some hope for you yet.

The post 10 Arguments That Signal The End of A Relationship appeared first on Power of Positivity: Positive Thinking & Attitude.

IcetruckJune 19, 2019
Like story:
tweet
Researchers Reveal Why Intuition Is The Most Important Kind of Intelligence
Scientists Explain How Couples Who Argue Often Love Each Other More