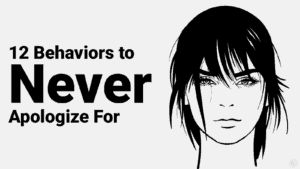 Whether platonic or romantic, the relationships that we have with others can help us cope with the stress in our lives. However, they can also be the catalyst for most of our stress as well. This is especially true when conflicts arise. That said, the ability to effectively apologize not only resolves stress but also deepens a relationship.

Conversely, the inability to effectively apologize can further strain a precarious relationship. In other words, it can make things far worse. Being apologetic entails much more than saying, “I’m sorry.” It requires making a concerted effort to express your feelings to another individual, which makes the apology more heartfelt.

In this article, we will take a closer look at how to be more sincere when apologizing. We’ll also consider the benefits that come with it.

A Perfect Guide To Apologize With All Your Heart

KNOWING WHEN TO APOLOGIZE

Knowing when to apologize is not always obvious. You may not realize that you did or said something hurtful to another individual. In many cases, the answer lies in self-assessment. If your actions would have upset or bothered you, they would likely have the same effect on the other individual. Sometimes it is best to err on the side of caution; offer an apology even if you only suspect that you did or said something offensive. In doing so, you will assume responsibility for mistakes that you have made. At the very least, you create an opportunity to reaffirm that what you did or said was, in fact, okay.

KNOWING WHEN TO EXPRESS REGRET

Assuming that your behavior does warrant an apology, it is important that you understand how to effectively communicate regret. This negative conscious and emotional response stems from one’s actions or lack of action. Communicating regret ensures that the other person understands how you feel bad, even if your actions weren’t intended to be malicious.

The best way to go about communicating regret is by stating what you believe to be a negative action and apologizing. This shows that you accept responsibility and you’re willing to make amends. Beyond that, expressing regret helps to boost the sincerity of your apology, which would otherwise not be felt by the other party.

While expressing regret and taking responsibility for your actions is all well and good, these actions wouldn’t be as meaningful if you don’t take steps towards making amends. After all, if your primary goal is to offer a sincere apology, it is a good idea to back up your words with some actions.

For example, if you said things that may have hurt or offended the other person, you can say things rooted in positivity to help offset the negative feelings associated with what you said in the past.

While this is great for intangibles like hurt feelings, it is also great for tangible issues as well. For example, if you’ve broken something that belonged to someone else, consider replacing it and also offering a sincere apology. This same applies to instances where trust may have been broken. You can take steps towards restoring it by acknowledging your wrongdoings. Additionally, try identifying ways to avoid similar problems in the future. This can often be accomplished by setting boundaries.

WHY HEALTHY BOUNDARIES ARE IMPORTANT

Whether we’re discussing relationships with friends, family, co-workers, or even in the context of a romantic relationship, it is important to establish boundaries. In doing so, you can avoid many of the pitfalls that can otherwise ruin a good relationship.

Two of the biggest benefits of setting boundaries are the ability to keep conflicts to a minimum and promoting closeness. Also, it can help keep stress levels from spiraling out of control. Boundary-setting can benefit your relationships with others and also provide individual benefits as well. These primarily come in the form of minimizing the impact that stress has on mental and physical health. All of that aside, let’s take a closer look at how boundary-setting can benefit not only relationships but also an individual:

Along with being able to apologize sincerely, keeping conflicts to a minimum is also a good practice. The best way to accomplish this goal is by looking inward. Identifying our own triggers is a great way to keep them from contaminating the relationships we have with others. For example, feelings of resentment and frustration brought on by a bad day at work can easily be transferred to our friends and family. One of the best ways to circumvent these problems is to let the other person know up front that you’re having a bad day. This will likely minimize conflict and possibly prompt compassion from the other individual. This type of boundary-setting can go a long way towards deepening and strengthening the bond of any relationship, romantic or otherwise.

Regardless of the context of your relationship with another individual, a genuine connection is critical when it comes to the long-term health of that relationship. Setting boundaries is a great way to minimize miscommunication and misperceptions that can cause the other party to become distant. While this sounds counterproductive, it actually works. Basically, setting healthy boundaries creates opportunities for closeness without the threat of feeling overwhelmed. To further illustrate this point, let’s look at some signs that can indicate the need to set boundaries in your relationship with others.

Signs You Should Establish Boundaries:

Identifying areas in your relationships where boundaries are needed is essential not only for the health of the relationship but also for your well-being. Once you have identified and implemented healthy boundaries, it will be easier to gauge your comfort level with others. Also, it will be easier to discern between who is being genuine versus who may be trying to take advantage of you.

SHOULD YOU APOLOGIZE WHEN SOMEONE IS BEING DIFFICULT?

Although a healthy relationship can be good for the soul, an unhealthy one can have the opposite effect. While we cherish the relationships we have with friends and family as well as our significant others, some relationships may feel like they’re not even worth salvaging, especially those where the other person is being difficult. But does this mean they are unworthy of an apology when one is due? No, it actually means you might have to be the bigger person and apologize, especially if the situation or circumstance warrants an apology. That said, here are a few tips that can make dealing with challenging people slightly easier:

Certain conversational topics are naturally very divisive, especially those rooted in politics or religion. In many cases, these topics can bring out the worst in people and can fan the flames of conflict. To avoid a heated debate, steer clear of these trigger topics entirely.

KNOW WHO YOU ARE DEALING WITH

The best way to handle dealing with difficult people is to understand who you’re dealing with. This often means acknowledging their negative traits. In doing so, you can work towards engaging with these individuals. For example, you would never tell your deepest, darkest secrets to someone who enjoys gossiping. Taking a moment to understand the personality of your friends, family, and acquaintances can help you avoid a lot of heartaches.

UNDERSTANDING THE DYNAMICS OF YOUR RELATIONSHIP

More often than not, the difficulty in any relationship stems from the ability to see and appreciate the other person’s perspective. Once you understand how another person behaves, you can use this information in finding better ways of managing your relationship. All too often people engage in conversation and activities that end in disagreements or arguments. So, how do you overcome these differences and promote healthier behavior patterns? Simply change how you respond to them. This could mean letting the other person vent their frustrations without you interjecting.

FINAL THOUGHTS ON HOW TO APOLOGIZE

The post How To Apologize With All Your Heart appeared first on Power of Positivity: Positive Thinking & Attitude.

IcetruckJuly 8, 2019
Like story:
tweet
15 Photos That Perfectly Capture The True Power of Love
Honey: 21 Amazing Benefits Will Surprise You