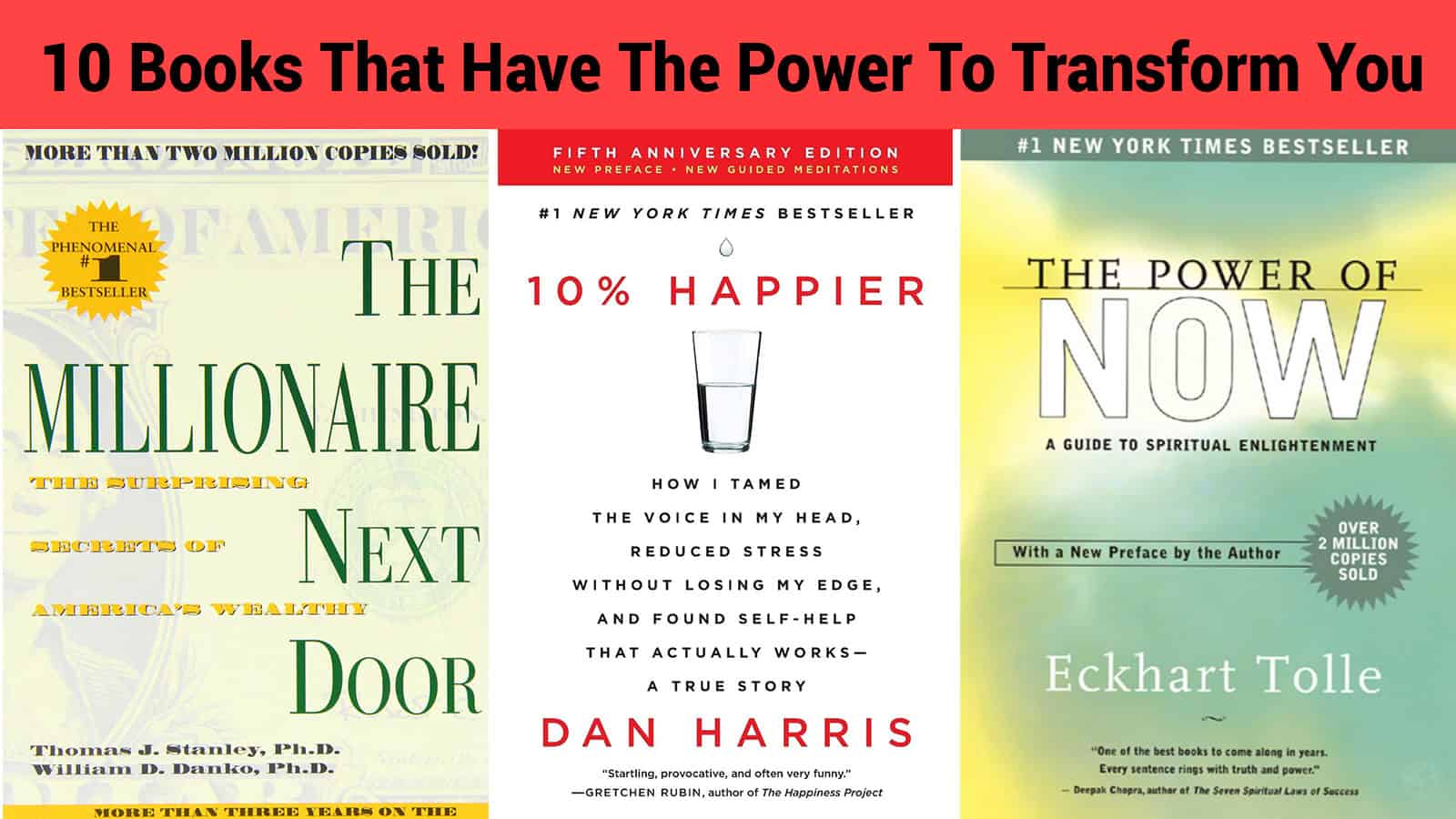 The right words, written by the right person, and read at the right time, has the power to transform the essence of who we are. If you’re seeking wisdom, check out these ten books.

Ask yourself: Why do I read? For two reasons: entertainment and knowledge. While the former can help us to forget our problems, the latter can help us to overcome them. While education is not necessarily wisdom, it can be that, which is one big reason why reading is so empowering.

We’ve got a long list here, so let’s get right to it.

Ten books that have the power to transform any area of your life:

Dan Harris is a co-anchor of the show Nightline and a prolific, well-respected host and reporter for various other programs. Harris suffered a nationally-televised panic attack while hosting Good Morning America that convinced him that some serious changes were needed.

Like many who eventually found peace of mind, Harris discovered that it was his mind that was the cause of his problems. More specifically, the constant voice in our head that never shuts up. Eventually, Harris found that meditation was the answer.

Harris’s account of his plight and his surmounting of it is frank, honest, and witty. Partly spiritual, partly practical, this book will help us become happier, a little bit at a time.

“…the happiest, most passionate employees… are those who have been around long enough to become good at what they do.”

In his smart, counterintuitive style, Newport makes it clear that he’s not a fan of omnipresently and cliche advice of “Just follow your passion.” Passion, Newport argues, is not the cause but the effect of doing good work.

Which is good for us, considering that most people don’t like their jobs. While some of us no doubt have a good reason for such disdain, Newport essentially warns again heading out for greener pastures too soon.

Instead, says Newport, the goal is to work on improving your skills, becoming good at what you do, and letting the passion come to you.

3 – Finances – The Millionaire Next Door by Thomas Stanley

“Wealth is often the result of a lifestyle of hard work, perseverance, planning, and most of all, self-discipline.”

Books that write about the mindset of millionaires and billionaires tend to be both abstract and fantastical as opposed to concrete and practical. Stanley’s book is solidly in the latter category – and he backs it up with meticulous research.

For example, Stanley details the seven common characteristics of American millionaires – 80 to 85 percent of whom are self-made – as:

“By fighting, you never get enough, but by yielding, you get more than you expected.”

Dale Carnegie’s bestselling book is the literary gold-standard of how to improve relationships. But it doesn’t stop there, as Carnegie convincingly writes that, by improving how we interact with people, we also expand our influence in any situation.

The genius of the work is that Carnegie teaches us how to apply his core lessons to nearly every conceivable social interaction, including the workplace. In other words, this book is a must-read for anyone who seeks to improve their social abilities for any (genuine) reason whatsoever.

“Friendship fuels the flames of romance because it offers the best protection against feeling adversarial toward your spouse.”

John Gottman, a.k.a. “The Marriage Whisperer” is the relationship expert of our times. He (gracefully) dispenses with the mushy lovey-dovey-but-ultimately-worthless nonsense that makes up so many “relationship” books on today’s bookshelves.

Instead, Gottman approaches marriage with a sense of compassion backed up with solid research on what actually makes a marriage work.

“I have never believed that you must completely love yourself first before you can love another … But it’s hard to sustain [this] love … until we have a sense of inner abundance and sufficiency.”

Sharon Salzberg, whose name is usually associated with meditation and mindfulness, wrote this dandy of a book on how engaging the present moment can assist anyone in finding and nurturing loving relationships.

Ms. Salzberg focuses her efforts throughout this book not only on guiding principles but in leading the reader through mindfulness exercises and meditation techniques based on loving-kindness.

7 – Spirituality – The Power of Now by Eckhart Tolle

“The only thing ultimately real about your journey is the step that you are taking at this moment. That’s all there is.”

While there are many brilliant and potentially lifechanging spiritual books, Tolle’s ‘The Power of Now’ stands above all. It does so by explaining, very simply, the essential problem that leads to all unhappiness: the inability to be present.

But Eckhart Tolle goes far beyond this basic observation by masterfully weaving a convincing work of self-discovery and – in many readers’ opinions – ultimate truth. Tolle’s book is entirely capable of upending any and all misplaced narratives around life’s purpose.

Cal Newport not only writes about living a productive life, he, well, lives it. He became the youngest tenured professor in MIT’s history in his mid-30s. He’s written books that have had as much impact on casual readers as his academic papers have had on the field of computer science.

At its core, Deep Work is all about focused concentration and the rewards thereof. For, as Newport clearly implies, few people are willing to do any semblance of deep work. Those who do are rightly rewarded and enjoy a greater sense of meaning.

9 – Health and Nutrition – How Not to Die by Michael Greger, M.D.

“When the Dalai Lama comments about your book, you know that you’re doing something right.”

While a relatively recent book (published in 2015), Dr. Greger’s work may be the most important concerning the role of food in preventing and counteracting disease. A topic that has become almost taboo with the proliferation of – and our overreliance upon – prescription drugs.

Additionally, the timing of this book could not be better. Especially considering that we in the West are contending with skyrocketing numbers of hypertension, obesity, stress levels, and other life-threatening conditions.

This classic needs no introduction.

Viktor Frankl was an Austrian Jew who survived internment in four different concentration camps over three years in Nazi Germany. Frankl chronicles his experiences as a prisoner, including the imprisonment and murder of his pregnant wife, his parents, and his brother.

Despite the horrific circumstances in the concentration camps, Frankl committed to living as fully as possible. To do so, Frankl often consoled his fellow prisoners, serving as a confidant and friend in times of both tragedy and relative peace. He would resort to humor in an attempt to lift his fellow prisoners, who were often suicidal and in the grips of angst, depression, and fear. Frankl, a trained neurologist, and psychiatrist would often use his self-designed therapeutic techniques in these interactions.

Frankl cemented his legacy upon his release. Included in his writings is his psychoanalytic theory of Logotherapy, which theorizes that meaning and a sense of purpose are integral to wellbeing and happiness.

IcetruckJanuary 18, 2020
Like story:
tweet
5 Habits to Optimize Your Brain
8 Health Benefits Of Yoga That Can Change Your Life »