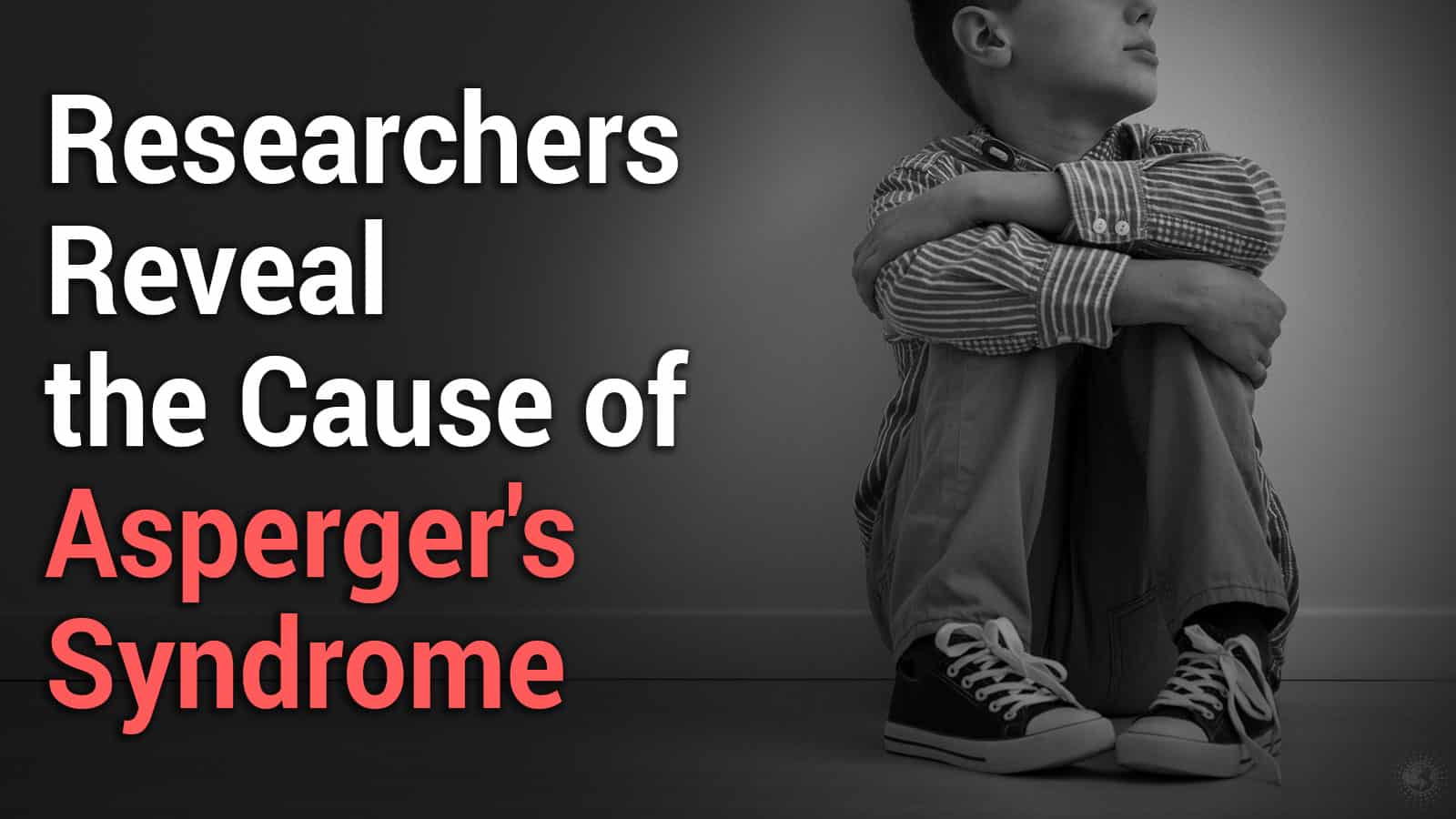 Asperger’s Syndrome is a developmental disorder on the Autism spectrum. However, it is classified as a more high-functioning form of autism.

You might be surprised to learn that many famous people have an Asperger diagnosis. Here are a few names that you’ll recognize:

Also, those with Asperger’s disorder tend to be impulsive, exhibit compulsive behavior, talk to themselves (sometimes in the third person), clumsy, and suffer from anxiety and depression.

While those with Asperger syndrome typically possess high IQs, they often exhibit social awkwardness. They may not know how to form proper relationships. And this can plague the individual with Asperger’s disorder throughout adulthood.

At one time, if asked, scientists would say that they had no idea what caused one to develop Asperger’s disorder. However, researchers studying this disorder can now pinpoint a few of the causes behind Asperger syndrome.

What are the characteristics of a person with Asperger’s Syndrome?

When you consider people like Daryl Hannah and Sir Anthony Hopkins as those living with Asperger’s, you’ll understand that the disorder can affect anyone from any background.

No, you won’t be able to look at someone and recognize that he or she lives with Asperger’s disorder. But once you spend some time around a person with the disease, and you’ll see the character traits associated with Asperger.

A few additional vital signs you may observe in a person with Asperger’s include:

You might think many of these characteristics are the same as someone with autism. However, you will find a significant difference. Those with Asperger’s disorder develop language skill milestones. Conversely, with autism do not speak or encounter developmentally-delayed speech.

A person with Asperger’s disorder may have exceptional verbal skills in that they have a high-level vocabulary. However, they may also talk to themselves a great deal. They might even speak to themselves in the third person at times. They may also develop repetitive speech patterns.

One distinctive issue where a person with Asperger’s disorder is concerned is a high level of vocabulary that is distinctly mismatched with the individual’s inability to pick up on nonverbal cues. They may not understand non-verbal cues, and this can lead to confusion when communicating. Those with Asperger’s disorder often feel a need to spend time alone, and the people around them may feel alienated due to this.

Again, there is no singular cause for the incidence of Asperger’s disorder, but researchers have been able to pinpoint some possible reasons an individual may possess this condition.

So to be clear, science now understands the syndrome more wholly than in past decades. However, they still continue to focus their efforts to find the precise cause. Here are the most likely causes.

Is there a genetic link to autism?

Scientists across the board accept that there is some genetic link to an occurrence of Asperger’s disorder. However, no specific gene has been isolated.

Asperger’s Syndrome is named after Hans Asperger, who, in the 1940s, studied and detailed the behavior of a group of male subjects who exhibited above-average intelligence yet possessed poor communication skills.

In Hans’ subjects, he noted common symptoms among family members, especially fathers. Further observation since then has lead scientists to believe that specific alleles may not only predispose a person to develop Asperger’s disorder but also in determining the severity of the condition.

Therefore, although no one gene has been determined to cause Asperger’s, researchers believe that there is a genetic link that influences whether a person will develop the condition or not. Scientists continue to find concrete evidence of this connection.

What are teratogens, and why are they a possible cause of Asperger’s disorder?

Teratogens are agents that cause congenital disabilities. Many things fall into the category of teratogens: metals, heat, chemicals, and more. By definition, a teratogen is anything that could cause an embryo to malfunction.

Scientists believe that the teratogens which cause one to develop Asperger’s are introduced to the embryo before the embryo is eight weeks of age. Most evidence points to the development of Asperger’s early on. Thus, Asperger’s (when caused by teratogens) may arise from exposure to an agent before the mother even realizes she is pregnant.

Does this mean that there are no environmental factors that may cause Asperger’s?

Many factors could cause a child to develop Asperger’s, many of which are environmental. However, scientists state that no scientific evidence exists to show precisely which of these environmental factors have a direct effect on whether a person develops Asperger’s.

At the same time, researchers believe that some factors can cause a person to develop Asperger’s rather than some other form of autism. However, no one has found evidence of what these factors are and why some individuals develop Asperger’s but not full-on autism.

What are some environmental factors that may cause Asperger’s?

Scientists believe that most of the environmental factors which cause Asperger’s reach the embryo during prenatal development.

The use by the mother of certain medications during the early development of the embryo may cause the child to develop Asperger’s later. Research points to anti-epileptic drugs as a prime example. One who takes certain medications for epilepsy may have developmental delays such as deficient motor activities and social behaviors.

Some evidence shows that acetaminophen, a common over-the-counter pain reliever, can cause severe developmental issues in a fetus. Asthma medications such as terbutaline, thalidomide (a painkiller), misoprostol (used to treat ulcers), and certain antidepressants link to an increase in the prevalence of Autism and Asperger’s disorder.

The socioeconomic status of the mother may also play a role in a child’s likelihood of developing Asperger’s disorder. Financial problems can affect the prenatal care the mother receives, and she may experience a great deal of stress due to these same issues. Researchers don’t completely understand what stress from finances can do to a baby. But scientists point out that a lack of proper prenatal care can have detrimental health effects on any child.

Furthermore, researchers state that the mental and emotional health of the mother can affect the fetus during those early weeks of development. A mother that is continuously stressed is going to produce higher amounts of cortisol, which can affect the developing embryo. Mothers who have some mental illness tend to have a higher incidence of autistic spectrum disorders developing in their offspring.

Mothers must also be well-nourished during the earliest stages of pregnancy. There is evidence that a lack of specific vitamins and minerals during pregnancy can influence the development of the fetal brain and nervous system.

Maternal health issues can also play a role in whether the offspring will develop a form of autism. These factors include the following:

Pre-term babies are more likely to develop an Autism Spectrum Disorder such as Asperger’s. Conversely, post-term babies (more than two weeks past delivery date) may also develop it.

Prenatal exposure to the chemicals thalidomide and valproic acid links to an increased risk of the child developing a form of autism. This fact is particularly actual during the early weeks of pregnancy when the brain is rapidly growing.

Final Thoughts: We are closer to understanding Asperger’s Syndrome…

But there’s still so much more for scientists to understand. Much of the research yields results that are inconclusive or observational in nature.

There is no definitive cause of Asperger’s Syndrome. However, evidence suggests that genetics, as well as several environmental factors, can cause a child to develop the condition.

Evidence exists that exposure to specific toxins during the first eight weeks of fetal development could make a child more likely to develop Asperger’s Syndrome.

Furthermore, the health of the mother might also contribute. Influencing factors include:

Each of those factors might cause the development of Autism Spectrum Disorder conditions, including Asperger’s Syndrome.

Researchers still have much to learn about Asperger’s Syndrome. As the library of knowledge continues to grow, we will gain greater insight into this disorder. And we should learn more about how to help people cope better with it.

IcetruckFebruary 27, 2020
Like story:
tweet
6 Things Confident People Avoid In Life
10 Signs It’s Time For A Couple To Get Help From A Marriage Counselor »