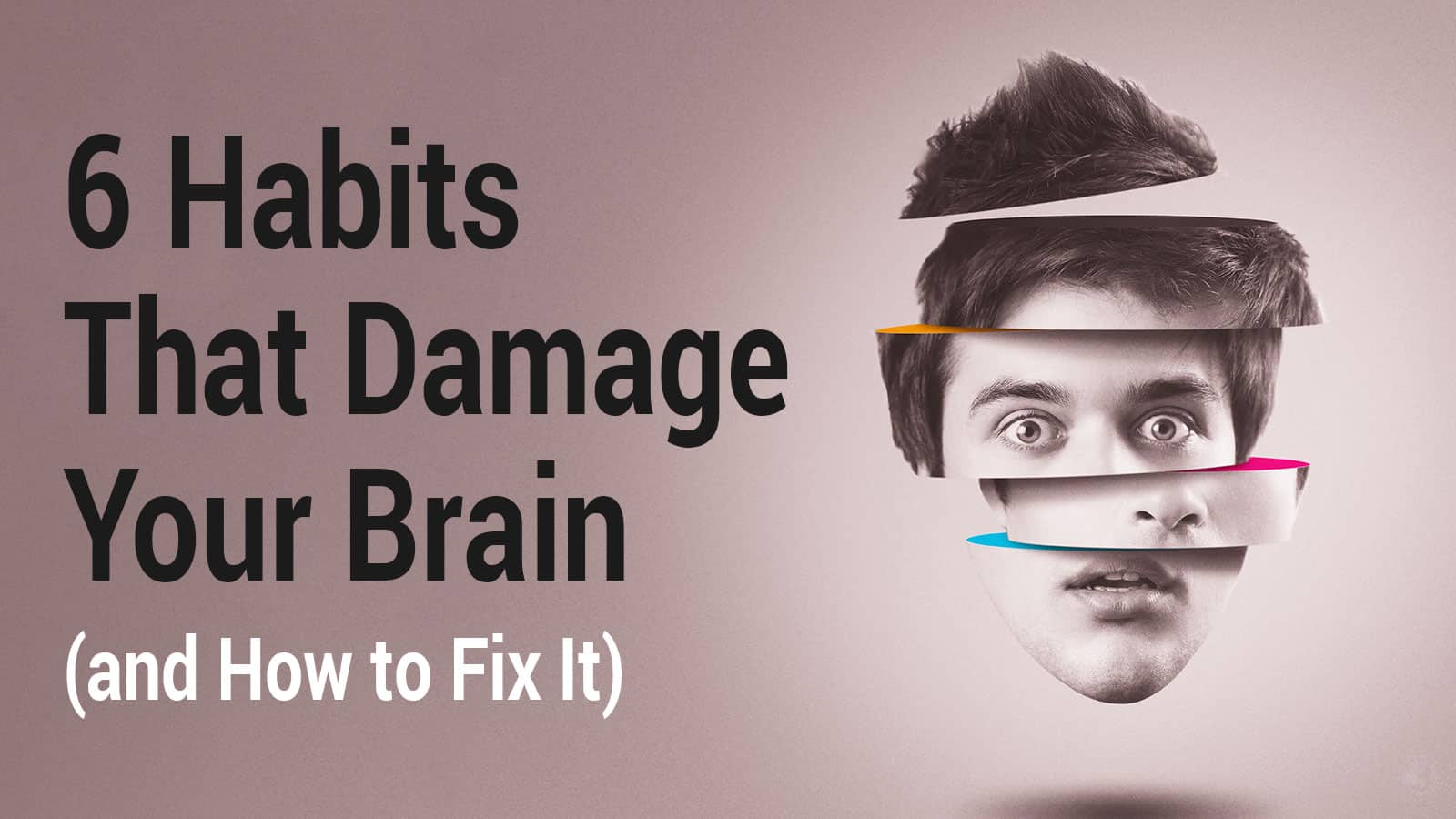 Are you participating in poor habits that damage your brain? You might be, yet you might not realize it.

The brain is our most precious organ. Intimately connected with the mind, the human brain is what makes us, well, human. Far as we know, no species that possesses even a fraction of the computing power of us humans.

Our brain is what has allowed up to traverse space, build incredible things, and develop life-saving medicines.

How about that for “Good news, bad news?”

Let there be no doubt that our habits contribute immensely to the state of our wellbeing – or lack thereof. Our brain stores and acts on our practices, and our habits determine our happiness.

Fortunately, we can rid ourselves of bad habits. It’s not easy, but it’s most certainly worthwhile.

Perhaps the most vitally essential habits to eliminate are those that cause us to suffer. As our brain is the primary source of our psychological states, it makes sense to start there.

The focus of this article, therefore, is twofold: (1) to discover those habits that damage the brain and (2) take action to dissolve them.

6 Habits that Damage the Brain

Being physically inactive is a seriously bad habit that damages the brain. Besides being a primary catalyst for multiple diseases – including cancer, dementia, depression, heart disease, and obesity – physical inactivity contributes to cognitive decline.

In a study published by the Journal of Comparative Neurology, researchers discovered that sedentary rats demonstrated excessive excitation in the brain region called the ‘RVLM.” Among other functions, the RVLM controls the activity of the sympathetic nervous system. This disruption may lead to the deterioration of the neurons in the area of the brain.

In other words, a lifestyle of physical inactivity can alter the structure and function of an otherwise healthy brain.

Per an article published by Harvard University’s Medical School, “Exercise helps memory and thinking through both direct and indirect means.” Regular exercise reduces inflammation and insulin resistance and stimulates chemicals that promote the growth of new brain cells.

If we’ve heard it once, we’ve listened to it 1,000 times: multitasking is either ineffective, a myth, or (most likely) both. If you’re a multitasker, you may think that this is all hogwash and that you can multitask.

This advice isn’t to incite a guilt trip, but to make people aware of the genuine (and often life-changing) repercussions of calling or texting while driving.

Multitasking is better thought of as divided attention, which is recognized by scientists as a type of brain function. Divided attention is the act of splitting your attention between two tasks; that is, you’re dividing cognitive resources to engage in separate tasks.

Mover, multiple studies have shown that multitasking increases the brain’s production of the stress hormone cortisol. “High levels of cortisol…wear down the brain’s ability to function properly,” per a study by Dartmouth University, as reported in an article, “[cortisol] can disrupt synapse regulation…kill brain cells…and reduce the size of the brain.”

Fortunately, there’s a straightforward solution to the multitasking problem: single-tasking! Single-tasking, as the name implies, is focusing all of your formidable cognitive power towards just one task at the exclusion of everything else.

Now only is single-tasking more effective, it’s also less stressful. While our brain may release cortisol – especially during times of intensive thought – it’s likely far less than if we were juggling two things at once!

Newsflash (not really!): Too much screen time isn’t good for you.

But it’s not just the physical screen. It’s also all of the information – text messages, notifications, emails, status updates – that are bad for us. Too much sensory input can lead to excess stress and decision overload.

Glenn Wilson, a professor of psychology at Gresham College (U.K.), found that attempting to concentrate on a task while having an unread email open in your inbox can reduce I.Q. by 10 points. In other words, information overload is not only stressful, but it makes us dumber.

Exacerbating the problem is the fact that we are unaware of the harm that our digital addiction is causing, especially to our kids. A study published in the Journal of Experimental and Clinical Sciences concludes:

“…there is a relationship between cell phone addiction and adolescent’s mental or physical health. We cannot neglect the [relationship] and its adverse effects on adolescents.”

Cliché time! It’s all about moderation.

Curbing technology use requires some discipline and, if necessary, the adjustment of priorities. It’s almost certain that our smartphone addiction is shortening our attention spans, worsening our memory, and making us more irritable.

If nothing else, resolve to put your phone down when at the dinner table or with the family.

Per a health science article published by the Washington Post, the average American adult spends about 6 ½ hours sitting per day – a one-hour increase since 2007. For kids aged 12 to 19, this number increases to eight hours.

While this sounds like a lot (it is), these numbers are probably on the low-end. Between commuting, work, and lounging around the T.V., some sources state that we spend up to 10 hours sitting.

This is terrible news.

Per a study published in the journal PLOS, a sedentary lifestyle “is a more significant predictor of [abnormal] brain structure… [then] physical activity.” The authors note that “physical activity, even at higher levels, is not sufficient to offset the harmful effects of sitting for extended periods of time.”

Obviously, there are times that we need to sit, like when we’re at work, driving, and so forth. But unless your job requires you to remain seated at all times, there are times where you can get up, stretch, and move around a bit.

To say nothing of the amount of time we spend staring at the T.V. set or computer screen. The advice here is simple: don’t spend too much time in front of a screen and get out more.

Here’s another potentially brain-damaging habit that many of us engage in.

We all love listening to tunes. If we’re at the gym and hitting the weights hard, our playlist can keep us goin’. When we’re in the car and need a pick-me-up, that volume knob often finds itself cranked all the way right.

But just because loud music is fun and energetic doesn’t mean that it’s right for you.

According to research cited by the U.K government, listening to loud music with headphones (defined as above 110 decibels) has the same effect on the brain’s nerves as multiple sclerosis. Nerve fibers can be stripped of the protective coating (myelin) and disrupt the brain’s signaling mechanisms.

Fortunately, myelin in the brain is capable of regrowth. As such, hearing loss may recover in many instances if the underlying issue is rectified.

As a rule of thumb, it’s a good idea to listen to your music at no more than 60 percent of your device’s maximum volume. Anything above that level increases the risk of brain damage and resultant hearing loss.

Most of us are well aware that poor sleeping habits are bad for us. Sleep deprivation, which the Centers for Disease Control and Prevention (CDC) calls “a public health epidemic,” contributes to illness and disease.

Neurologically, some of the effects of poor sleep are rather obvious. Reactions time drops, we’re more error-prone and feel more depressed and anxious than usual. Insufficient sleep can also cause headaches, hormonal imbalances, and impaired memory.

Long-term, some research shows that lack of sleep causes the brain to shrink.

Sleep is critical for brain health. We must make it a priority to establish healthy pre-bedtime and bedtime sleeping habits.

Here are a few ideas:

Final Thoughts on Overcoming the Habits That Damage Your Brain

We must each take accountability for our actions. That statement is particularly true when it comes to taking measures to stop participating in unhealthy habits that damage your brain. Promise yourself you will shed those poor habits and embrace the new ones that will help you enjoy a longer, happier life.

IcetruckFebruary 28, 2020
Like story:
tweet
10 Signs It’s Time For A Couple To Get Help From A Marriage Counselor »
Counselor Reveals Tips to Help You Stop Cursing