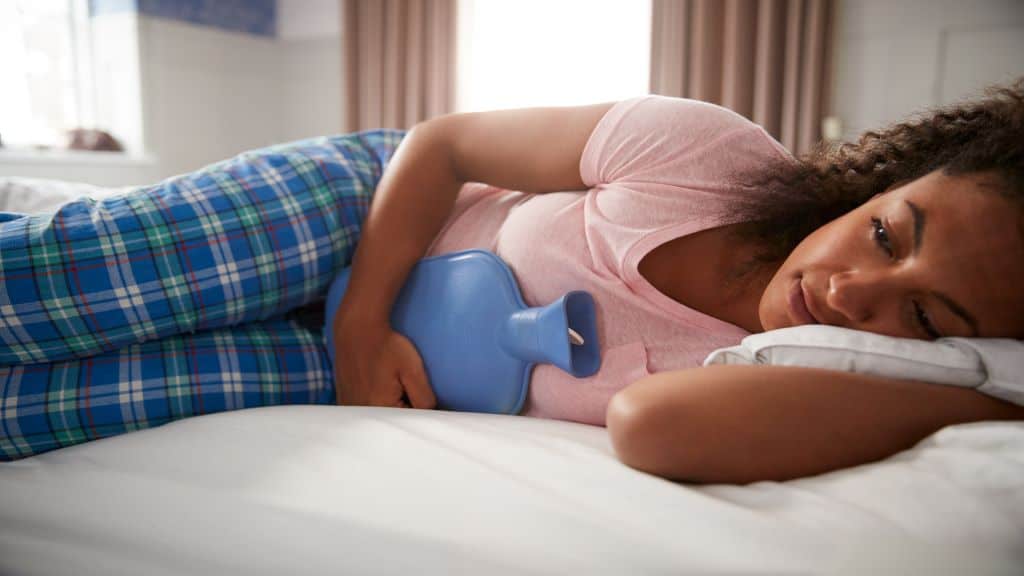 Premenstrual syndrome (PMS) is a widespread condition that affects women about a week or two before they get their period. About 90 percent of women experience such symptoms as moodiness, headaches, and bloating during that time.

The premenstrual syndrome includes a variety of physical and emotional symptoms in addition to the ones listed above. The symptoms tend to become more severe as the woman approaches menopause. Physical symptoms can include constipation, diarrhea, reduced tolerance for light or noise, cramps, and tender or swollen breasts. Emotional symptoms can consist of food cravings, decreased interest in sex, changes in sleep patterns, or difficulty concentrating.

While there are medications that can be used to control PMS, there are also a variety of natural remedies. Consider the following possibilities.

Here are some time-tested natural remedies for PMS.

Saffron is a spice coming from the flower of the saffron crocus (Crocus sativus), and it relieves the symptoms of even severe premenstrual syndrome. In 2008, BJOG: An International Journal of Obstetrics and Gynecology described a study in which researchers worked with women who were between 20 and 45 years old.

The scientists gave some of the women 15 mg capsules of saffron twice a day for a total daily dosage of 30 mg; the other women received placebos. The researchers found that the saffron capsules did help relieve symptoms of premenstrual syndrome. Some people also recommend smelling saffron for up to 20 minutes to reduce anxiety. This treatment works by reducing cortisol or the stress hormone.

The Natural Medicine Journal described a study in which researchers gave tablets to volunteers three times a day. The pills contained 40 mg of ginkgo or were placebos. The scientists found that the women who received ginkgo tablets experienced less depression than the women given placebos. The ginkgo tablets also relieved other symptoms like soreness in the breasts, palpitations, insomnia, fatigue, and bloating.

In 2014, the science journal Phytotherapy Research described a study in which the researchers examined the effects of clary sage oil on the cortisol and serotonin levels in women undergoing menopause. The scientists divided the women into two groups: those who were prone to depression and those who were not. Both groups showed a marked decrease in cortisol levels and a marked increase in serotonin levels after inhaling clary sage oil. The reduction in cortisol levels was particularly marked in the women susceptible to depression. The researchers described clary sage oil as having an “antidepressant-like effect.”

Clary sage oil helps fight depression by keeping thyroid hormones in balance. Its effects on both cortisol and serotonin mean it can boost mood and reduce the severity of mood swings.

Lavender oil, which is made from any of several plants belonging to the genus Lavandula, is well-known for its relaxing effects. It can be taken in oral forms like Silxean or used in aromatherapy.

The journal BioPsychoSocial Medicine described a 2013 study in which researchers worked with a small group of women in their 20s. Some of the women inhaled the aroma of lavender, and some used water as a control. The scientists used heart rate to measure lavender’s effects on the autonomic nervous system. The women would inhale the lavender for different times ranging from a few minutes to 35 minutes. The researchers found that inhaling lavender stimulated the autonomic nervous system and relieved psychological symptoms of PMS like confusion, fatigue, and depression.

In aromatherapy, lavender oil can be used by itself or combined with clary sage oil. You can also use lavender in an Epsom salt bath or massage it on your stomach to ease menstrual cramps.

In 1998, Proceedings of the Society for Experimental Biology and Medicine described a study in which scientists examined the effects of different herbs, spices, and foods on progesterone and estrogen. They found that thyme had substantial effects on both.

Thyme can be made into an essential oil that can keep progesterone levels in balance and thus prevent or relieve symptoms caused by low progesterone such as insomnia and mood swings. Thyme can also reduce stress.

In 2014, the journal International Scholarly Research Notes described a study in which researchers treated young women with capsules containing the spice ginger. Each volunteer took two tablets a day, and some women were given placebos. The researchers looked for effects on physical symptoms like headaches or nausea, mood changes like anxiety, or behavioral issues like insomnia or trouble concentrating. The scientists found that ginger could relieve symptoms of PMS in all three areas, but it was particularly effective in reducing physical symptoms like headaches, nausea, and joint pain.

St. John’s Wort is an herb that is often used to treat depression and related symptoms like insomnia. In 2010, the journal CNS Drugs described a study in which researchers treated women with tablets made from St. John’s Wort. Each woman took 900 mg every day, and some women got a placebo. While the St. John’s Wort did not affect any pain related to PMS, it did relieve the behavioral and physical symptoms.

St. John’s Wort can also be made into a tea and used to treat insomnia. It can increase the skin’s sensitivity to UV rays, so people who drink it should limit their exposure to the sun.

Almond milk is a dairy-free alternative to cow’s milk that can be enjoyed by vegetarians, vegans, and people with lactose intolerance. It is a good source of fiber, Vitamin B12, and Vitamin E, all of which provide many health benefits. Vitamin E, for example, can prevent some eye diseases, control blood sugar, and regulate hormones. It can thus relieve symptoms of PMS like bloating, cramps, and mood swings.

Rose oil is another essential oil that can be used in aromatherapy to relieve PMS. In 2018, the International Journal of Gynaecology and Obstetrics described a clinical trial in which researchers used essential oil made from the Damask rose (Rosa damascene). The participants inhaled the oil or a placebo for five minutes twice a day. The researchers observed marked improvements in the patients who used rose oil.

Chamomile is probably best known as a tea that aids sleep and relaxation. The Journal of Pharmacopuncture published a 2019 review in which researchers examined multiple studies to determine chamomile’s efficacy as a PMS treatment.

The scientists found that chamomile tea has a multitude of beneficial effects. It has anti-spasmodic properties and can thus relieve cramps. The tea can ease depression by regulating serotonin and dopamine. It also has analgesic properties that help it reduce pain.

The International Journal of Preventive Medicine published a 2018 study in which researchers examined the effects of geranium oil in women with PMS. They divided 120 women into three groups: a control group, an aromatherapy group, and an aromatherapy massage group. In the last group, the participants would massage the oil into their abdomen and arms. The researchers found that aromatherapy massage proved the most effective in relieving symptoms like headaches, bloating, or chest pain.

Grapefruit oil boosts mood and improves alertness. Merely sniffing the oil can make you feel less groggy after waking up. Add ten drops to a diffuser and enjoy the citrus scent.

Neroli oil is made from the flowers of the bitter orange tree (Citrus aurantium). Aromatherapists rely on it often, thanks to its beautiful fragrance. The Journal of Family Medicine and Primary Care published a 2019 study that compared the efficacy of neroli oil to that of Damask rose oil. Both oils relieved some of the symptoms of PMS. While Damask rose oil usually had more potent effects, neroli oil was better at reducing feelings of helplessness or loss of control. The scientists also found that neroli oil could boost mood when massaged into the skin.

Bergamot oil can both relieve stress and improve mood. It does the former by controlling cortisol levels. It can also lower blood pressure and reduce heart rate. You can add bergamot oil into a diffuser or apply it to the skin. Since it can significantly increase the skin’s sensitivity to sunlight, you should always mix it with a carrier oil with a 1:1 ratio, and avoid sunlight for at least three days after using it.

Final Thoughts on PMS Remedies to Try at Home

There are many natural treatments for PMS, and different treatments work best against various symptoms. Choose a treatment that works best against your most troublesome symptoms. If you can’t sleep, for example, you might want to drink chamomile tea. If you struggle with depression, try clary sage oil.

IcetruckMarch 16, 2020
Like story:
tweet
How To Use Your Writing For Maximum Audience Engagement
20 Things to Avoid if You Want to Be Happier