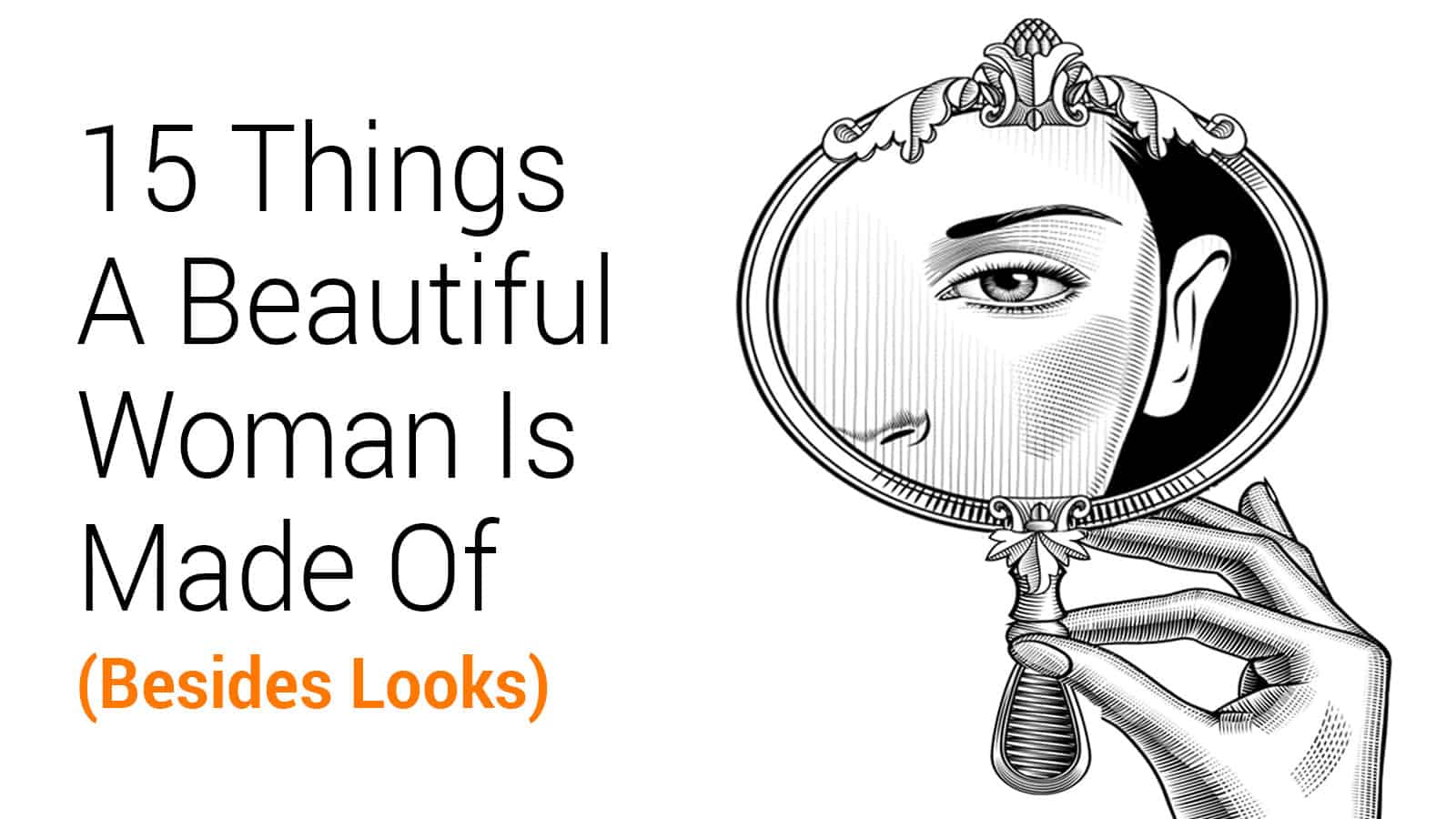 The pressure to be beautiful has been present for as long as the concept of beauty was known to humans. Physical attractiveness often earns people preferential treatment. But beauty isn’t just about what’s on the outside, you know!

There are many different kinds of beauty, and most people carry at least a few tidbits of those kinds within their bodies. But with all the pressure on women to be conventionally attractive, it’s hard to remember that it’s not all about appearances.

Here are 15 things a beautiful woman is made of, besides looks!

Beautiful people are often curious. They want to learn more about the world around them, and their interest in the world shines through. As funny as it sounds, being interested in things can make you more attractive! Beautiful women may be curious about:

This curiosity pushes them to seek answers, ponder possibilities, and explore the world, expanding their horizons, and always striving for even more. There’s no limit to what one can be curious about. A love of learning and a drive to ask questions is beautiful in anyone, regardless of gender!

Someone who only follows the crowd isn’t going to be particularly interesting. A beautiful woman is proud of her uniqueness. She boldly stands out without trying too hard, just by being her unapologetic self. She doesn’t care about trends and only follows them if she likes them, and outside of that, she’s happy to pave her path and go her own way.

That’s not to say that you can’t like ordinary or necessary things and be beautiful. Of course, you can! After all, the reason “basic” characteristics are considered as such is that they’re so easily likable. But don’t be afraid to showcase your weird side, too!

Intelligence is attractive. Numerous studies (and personal accounts from people in the dating scene!) state that knowledge can have positive effects on perceived physical attractiveness. Being smart is sexy!

Do note that intelligence doesn’t have to refer to book smarts, philosophical discussion, or scientific subjects. After all, it is commonly believed that there are multiple different kinds of intelligence. Gardner’s Theory of Multiple Intelligences lists the various forms of intelligence as:

Intelligence can refer to many different things. This includes:

Authenticity is beautiful. It makes someone trustworthy, as you know that what you see is what you get from them. Though there’s much to learn about them, you know that you can take them at face value. A genuine person will:

One of the most prominent features of a genuine person is their unapologetic ability to just be themselves. They show off their personalities and quirks, not seeking to hide their true selves. Authenticity also goes hand-in-hand with uniqueness!

The ability to put one’s self in the shoes of another can be difficult, but beautiful women have mastered this skill. They are never judgmental, and they know that the world is full of different cultures, each one teeming with people who have unique thoughts, beliefs, personalities, dreams, and goals.

Beautiful women embrace these differences. They are open-minded and eager to learn about those around them. They would never write someone off just because they don’t agree with them. Instead, they leave their preconceived notions at the door and listen, seeking to understand others.

At the end of the day, there’s a good chance that no opinions will be changed on either side. But that doesn’t matter to a beautiful woman. Tolerance of other views and decisions is part and parcel of open-mindedness, and they appreciate the opportunity to learn different perspectives with positive thinking.

Passion is not limited to any narrow definition. It can encompass many things at once or just a few things. What matters is that passion, as a trait, is inherently attractive, and it’s something most beautiful women have in common. Here are some examples of ways such a woman may show her passions:

Compassion can change one’s entire demeanor. A kind person looks more open and often happier than those who are selfish or mean. Studies have found that positive personality traits, such as compassion, can significantly impact the perceived attractiveness of a person.

On top of that, compassion is a trait that represents inner beauty, to begin with, so it goes without saying that lovely people have kindness ingrained in their personalities. They may:

We already know beautiful women are kind – but that kindness is also extended inwards. Beautiful women know that they must cherish themselves – their minds, their bodies, their souls, and their emotions must all be well-kept. Here are some ways a beautiful woman may practice self-love by doing the following:

Of course, we aren’t saying that you’re ugly if you’re still learning to love yourself. That’s a journey many of us go on, after all, and it doesn’t determine your worth! But what we will say is that when you can care for yourself well, it shows, and it adds a new dimension to the beauty you already have.

Beautiful women have a high energy about them. Yes, they are energetic, but that energy is productive, effective, and positive. They tackle obstacles head-first. They have efficient days full of tasks that they are eager to complete. Their power goes on to energize others. It’s incredible, and it’s hard not to like a woman like that!

And then, at the end of the day, when it’s time to rest, a beautiful woman does so her way. She’ll do whatever helps her wind down, and she’ll be happy to do it all over again tomorrow!

Pessimism can be a severe drain on beauty. The negative energy that comes with it can drag anyone down and make even the most physically pretty people seem unattractive or not worth spending time with.

On the other hand, optimism and positive thinking have been found to improve the attractiveness of a person. A beautiful woman isn’t blindly positive, but she is optimistic and looks at the world with hopeful eyes.

A beautiful woman is grounded. She’s level-headed, and her feet are firmly on the ground. What does this mean? She’s humble. She doesn’t feel that she needs to sing herself praises, or brag to others about her experiences.

Remember, humility and insecurity are not the same things. Therefore, a beautiful woman is not insecure. She simply doesn’t feel the need to make herself the center of attention or to demand praise from those around her. She lets her actions do the talking!

This sounds like it contradicts our previous point, but we promise that it doesn’t! A beautiful woman is proud of herself where she deserves to be. She’s proud of her accomplishments, how far she’s come, how she’s overcome failures, and everything in between.

This pride shines through in conversations, and it’s obvious enough that it can up someone’s level of attractiveness. In other words, a beautiful woman knows what she’s worth and isn’t going to stop being proud of that value. She would never brag, but she wouldn’t dismiss her abilities, either.

A beautiful woman has ambition. She’s a woman on a mission, with all that energy and passion propelling her forward. She’s independent, and her goals are all her own – many of which she has already accomplished!

We don’t mean, of course, that beautiful women have their entire lives figured out and planned from top to bottom. Instead, these individuals have goals and dreams, and even if they haven’t figured out how to reach them yet, beautiful women let their ambition motivate and drive them.

Laughter causes you and those around you to smile, and a beautiful woman loves to put smiles on other people’s faces! She laughs loud and true, appreciating humor and finding the good in relevant situations.

This also means that beautiful people are great at relieving tension. If things get awkward, they can just pull out a joke or two and get right back on track. Laugh with a confident woman, and you’ll enjoy a release of positive hormones, both from you and from them!

Confidence is undoubtedly a beautiful woman’s most stunning straight. She is unabashedly herself, so she does what makes her happy. She accepts risks and challenges. She’s proud of herself. Most importantly, she’s honest. What else could someone want?

Let’s face it: confidence is the most commonly loved trait that is considered very attractive across all genders. A beautiful woman’s confidence speaks for itself, and you’ll be impressed by it!

Final Thoughts On Some Things A Beautiful Woman Is Made Of

A woman is so much more than just her looks. She is her personality, her hopes and dreams, and the way she carries herself. She is her values, her ambition, and her energy. A beautiful woman isn’t beautiful just because of her appearance, but because of what’s within.