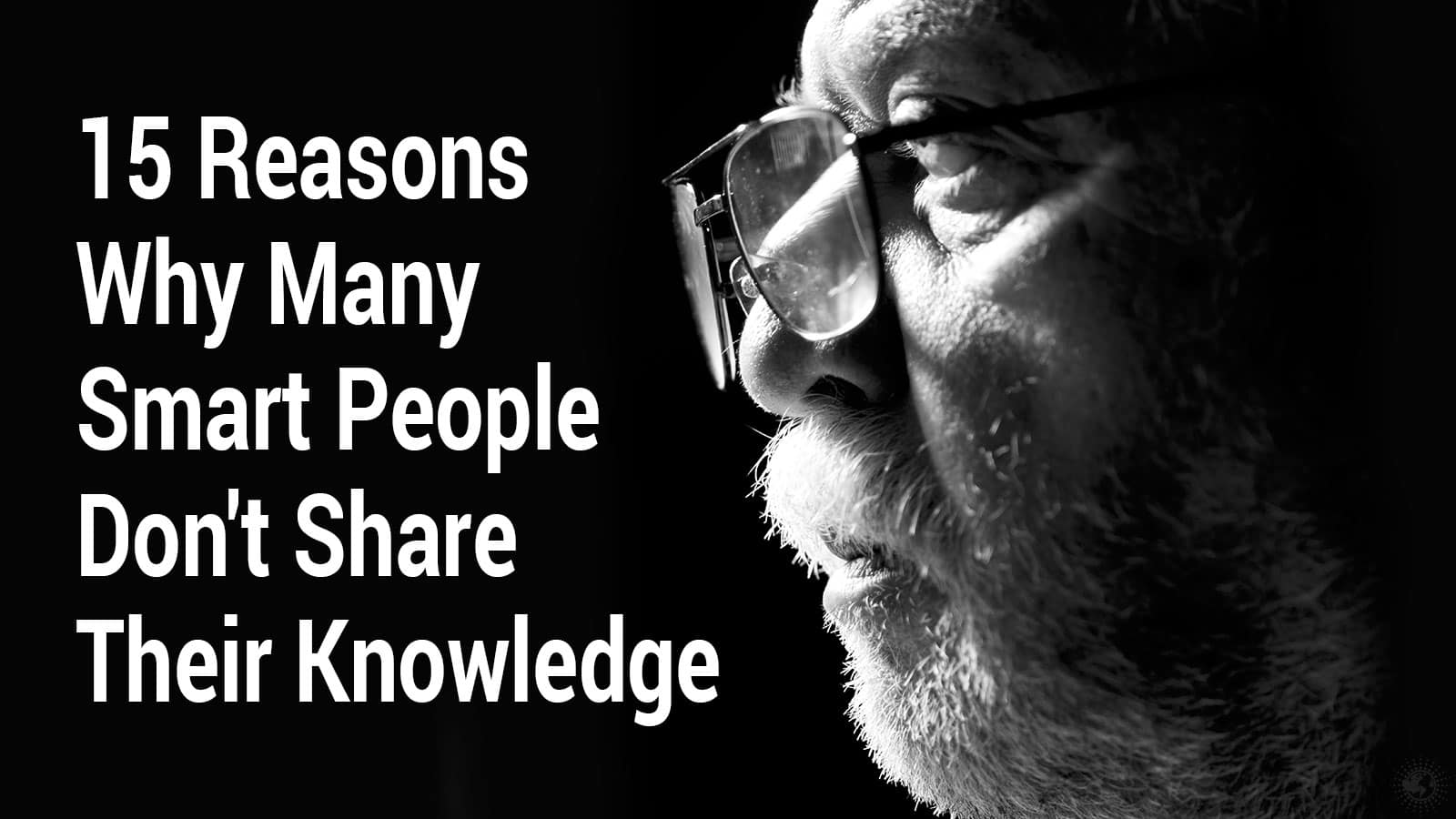 Smart people are great individuals to look up to. They seem to know so much, but sometimes, they also share very little. You want to learn from them, but they keep things close to their chest. Why?

There are many causes for a smart person’s choice not to share knowledge with others. You aren’t entitled to that knowledge to begin with, but it can help to understand where they are coming from.

Here are 15 reasons why many smart people don’t share their knowledge.

For some people, sharing knowledge comes easily and naturally. It’s a simple process. But for others, it can be challenging to do so. After all, you often need a platform to share knowledge or at least need to be among the right people who would want to hear it.

Try asking a smart person for some of their knowledge next time! If they give it to you willingly, then the only thing stopping them was difficulty in sharing it. Don’t hold it against them, though! Encourage knowledge sharing among your friends to reduce this problem.

2.    They Think Knowledge Is Power

Some people wholeheartedly believe that knowledge is a form of power. Yes, it’s true that there’s a famous saying that claims this, but that saying speaks in a metaphorical sense, informing listeners that knowledge can give you what you need to succeed.

But for some smart people, knowledge isn’t just power in that sense – it’s the kind of power your hoard. As an example, they may:

These types of selfishness can be discouraging to encounter, but smart individuals who hoard knowledge for these reasons aren’t worth your time. Put on some positive thinking and seek information elsewhere!

This idea sounds like a selfish concept at first, to think that a smart person would refuse to share knowledge because they don’t get something from it. But think about it – how many things do you do that you don’t get anything from? You may feel that you aren’t ever doing tasks out of personal gain, but think again:

What does this mean? Well, smart people may not think to share their knowledge because the part of their brain focused on survival realizes that there is no benefit to be gained from expending their energy this way.

Certain smart people fail to realize that they aren’t sharing their knowledge. His is because they often learn very quickly and don’t understand that others don’t do the same. This depends on their learning style. For instance:

A lot of smart people are always on the move. They’re driven people with full schedules and a lot to do. Without the time to share that knowledge, they simply can’t impart it to others.

For other smart people with a bit of free time, sharing knowledge may not feel like a very high-priority action. They have different aspects of their lives they want to spend that time on, like hobbies, personal growth, travel, or social activities.

6.    They Assume Everyone Already Knows

When someone is exceptionally smart, they may simply believe that everyone has picked up the same knowledge as them. It can feel so basic and simplistic to them that it feels condescending to share it with others.

Consider it this way: would you design to share with others of your age how to add or subtract numbers, how to read complex words, or how to do the dishes? It would feel odd to try and impart what feels like basic and trivial, standard information to others. That’s what it feels like to some smart people.

7.    They Have Faced Negative Consequences From Sharing Before

From a young age, negative reinforcement can have unintended consequences on people and their positive thinking and anxiety levels. The effects of what you do can often stick with you well into adulthood, resulting in emotional baggage from childhood that can be tough to understand.

Many smart individuals can be very passionate about their areas of interest, and at a younger age, most of them would have very excitedly shared their passions with others. But people who find those topics boring or uninteresting, or simply have no time to listen to it may have hit them with adverse reactions. They may have been bullied for expressing this interest.

As a result, today, they may be reluctant to share their knowledge for fear of similar “rejection”. Positive reinforcement can encourage them to share what they know, but don’t expect it to work right away.

8.    They Don’t Receive Respect From Others

The act of sharing knowledge is worthy of respect. It involves an exchange of information, often out of the goodness of one’s own heart. Is that not a position worthy of some favorable treatment and respect.

For smart people who are looked down upon even after sharing knowledge, or who are not treated with basic respect, it can feel ridiculous to want to share knowledge with those disrespecting them – and for a good reason.

9.    They Believe That Others Should Put The Work In Themselves

Self-made smart individuals put hours and hours of work into being who they are today. They may have even started not feeling or being stereotypically bright and are only considered such today thanks to all their hard work.

If that’s the case, why would they expect less from those around them? In their eyes, others should work just as hard as they did to achieve what they have achieved. It’s a valid, though slightly flawed, stance, and not an opinion that is likely to change.

10. They Are Only Willing To Share In Certain Circumstances

Some smart people get easily jealous of those who are at their level of expertise. They want to be the very best among everyone, which means they will, of course, not want others to share their knowledge.

If they help others, those people will receive positive boosts in their performance, which could make them potential rivals. This is a rather selfish stance and – again, like the previous selfish stance we discussed – not worth the effort.

Smart people may lack a feeling of trust towards others. This can make them reluctant to share their knowledge and is often a result of previous experiences. They may fear that:

Sharing knowledge in the right amounts can be somewhat difficult. If you overdo it, you can sound like a preachy or lecture-y know-it-all. You want others to openly receive your knowledge, and sometimes, to do so may require withholding some information for a while.

Some smart people don’t know how to walk that line, or simply don’t feel comfortable attempting it. There is also a chance that they have been made fun of for being a know-it-all in the past.

Introverts aren’t very people-oriented. Sharing knowledge means expending energy and effort around other people, and that might just not be something the person in question is interested in doing.

Introverts can also have difficulty reading social cues, so they are unable to make positive contributions when it is open for them to do so. As a result, they may prefer to keep things to themselves to avoid potentially awkward situations.

15. They Realize That They Have A Lot More To Learn First

Have you heard of the Dunning–Kruger effect? It refers to a cognitive bias that causes people to feel that their level of knowledge is greater than it is. But, the more they learn, the more they realize that they have left to learn.

This means that feelings of positive confidence can diminish the more a smart person learns about an area of knowledge. They will start out feeling like the subject is easy, but realize the further they go that this is far from the case. This can also affect others – you may feel like these smart people are experts because you think that’s all there is to know!

A smart person who won’t share their knowledge because they feel that they have a lot more to learn is being responsible. Half-knowledge can be dangerous, and they will not act as an expert until they think that they have truly become one.