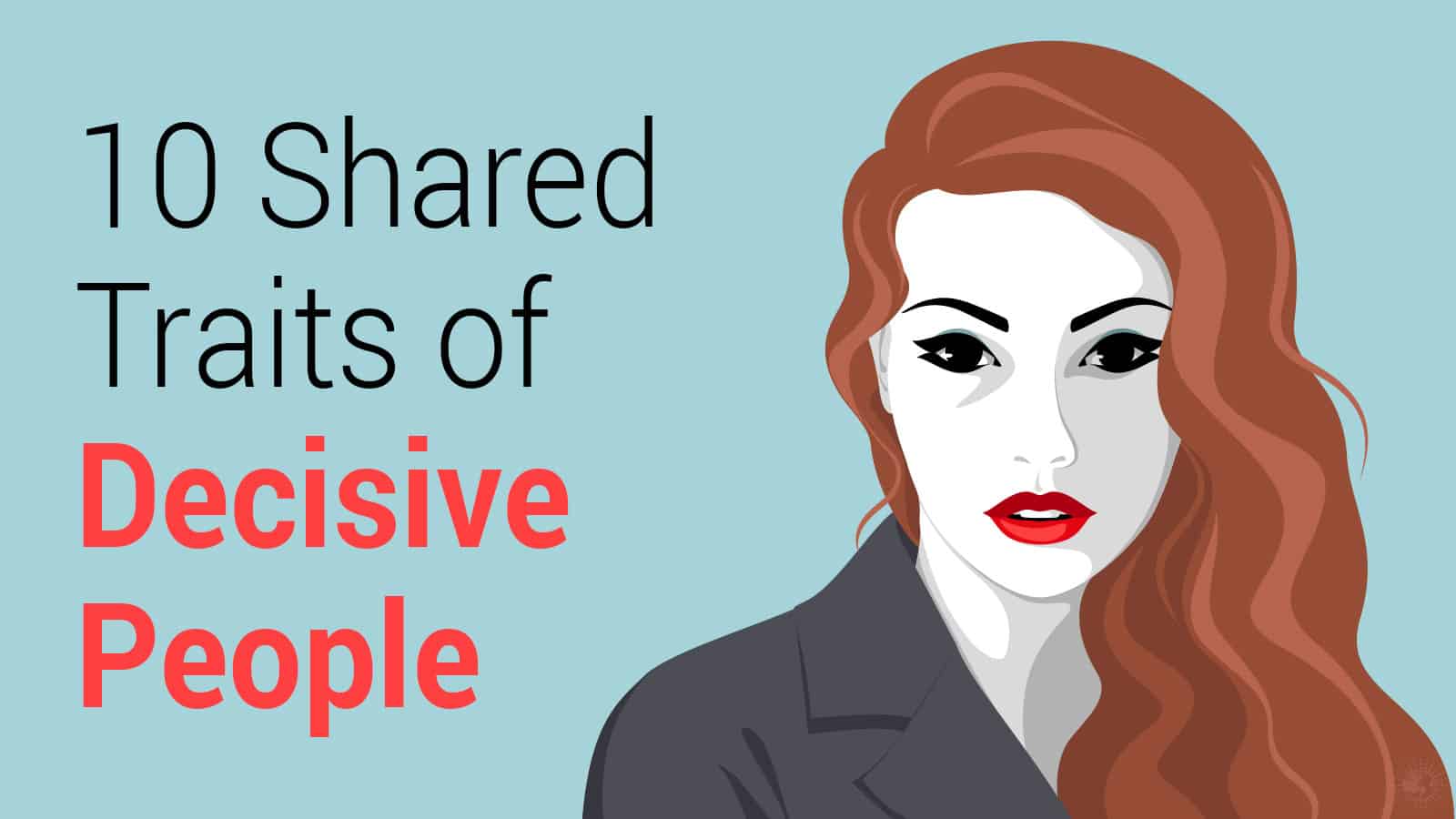 Decisive people have a natural ability to decide quickly and definitely. They share a specific group of traits that are unique to their group. These traits are ones everyone can work on if they want to fall into that category, as well.

Often, decisive people are the ones who tend to be the most successful. This is because they make a quick decision and stick to it, seeing it through until the end. These are the people who don’t wait for the right moment. They act right away.

When a quick and definite decision is made, it allows more time to act on the decision. This gives typically decisive people a head start because they’ve made the decision more quickly than others.

By learning the shared traits, you may be able to take on some of those traits yourself. Practicing the habits will help you develop them yourself, or it’ll help you solidify the characters if you already have them. This will be a way to emulate the habits of successful people.

1. The ability to see the big picture

Seeing the big picture can help with understanding which decisions to make. If the desired result is known, the correct paths can be taken to get there.

It also helps them realize that one decision is smaller than the big picture. This makes the decision-making process more comfortable, as there will be another decision in the future. One hiccup won’t ruin the entire plan.

2. Intent listener and knowing which questions to ask

By listening to others, they know who to partner with and whom they are up against. Not only that, but they hear and remember the small spoken details that may come in handy later.

They need to know which information will be necessary to make a quick decision. This results in asking the right questions immediately and moving forward with the answers.

3. Decisive people live in the present

They don’t dwell on what happened in the past, nor do they worry about the results of their decisions. Problems or failures are left in the past, and they only bring the acquired knowledge along with them. They also make decisions and address potential issues as they arise, rather than stress before making the inevitable decision.

The more they know, the quicker they can make an educated decision. It’s easy to be confident in a decision if you knew the answer or solution right away.

These types of people are always exploring new ideas or studying something new. They’re also still honing their skills by asking questions and obtaining further information. This comes from an understanding that knowledge is essential on the list of habits of successful people.

They also always learn from every experience, so they don’t make the same mistakes twice. Plus, if something works for them, they learn to grow on that, as well.

Keeping their sights focused on the goal, they’re able to focus their mind on the problem at hand. By doing this, they eliminate all other thoughts until they’re reached a desirable decision. This ability allows them to make a quick and definite decision without outside factors interfering.

They also come to the conclusions quicker when they focus. This is because breaking concentration can cause regression in the thought process. Since they don’t let this happen, no regression occurs, and they can have a reliable stream of thoughts.

Another benefit to being focused in this sense is that they won’t pull others away from essential tasks. This means that the most important things aren’t being pushed to the side for something that isn’t as important. In a business position, this proves to be a very successful tactic.

It is essential to point out that for the delegation to work, they cannot micromanage. Micromanaging is just more stress for all involved, rather than being beneficial.

This trait is what gives them the ability to make quick and definite decisions. They are confident in themselves and know that they are capable of making decisions quickly.

Another way that confidence is a trait of those who are decisive is that they show extroversion. This means that they are socially confident and able to easily and comfortably talk to others. While this may not be important in the decision-making process, it is essential for successful networking.

If a decision goes wrong or a hard time occurs, they’ll be able to move forward. This resiliency enables them to be comfortable with making quick decisions. If it doesn’t go as planned, they know they can always try again.

With resilience comes the ability to go back with the same confidence as before, but with more knowledge. As mentioned previously, those who are decisive are always learning new things. They also know that every hardship makes them wiser and more robust, making the decisiveness stronger next time.

Being resilient also means this type of people will own up to their mistakes. They won’t place the blame on anyone else, as they know they made the decision entirely on their own.

Decisive people know that the blame will rest solely on them. This is one of the ways they are resilient. They know they will be blamed for mistakes, but they take the chance anyway.

9. Decisive people are passionate about life

When passion is involved, decision making is more straightforward. They know what they want, so it can be as simple as choosing the path that will lead there. Being passionate also makes quick decision making enjoyable.

The joy that passion brings eases the stress that may come with decision-making. This could be one reason that passionate people tend to be decisive. It helps them be relaxed, which leads to listening and asking the right questions.

It also helps them stay resilient because they won’t give up their passion for any mistake or hardship. They know they have to keep going, so it makes it easier to not dwell on the wrong decisions.

10. They are comfortable taking risks and don’t need approval from others

With quick and definite decision making, chances are likely being taken. Even so, decisive people do this all the time.

By taking risks, they aren’t holding back. They’re betting on the fact that they can be successful. Without that, they’d take much longer to reach their goals.

When taking risks, they know this means that not everyone will approve. Those who are decisive know this, so they don’t look to anyone else for approval. This contributes to their quick decision-making ability.

Had they needed approval from others before feeling confident in their decision, it would have cost them much more time. It also would show that they weren’t quite as sure, or they would have decided on their own. Fortunately, these types of people don’t need approval, so their decisions are quick and definite.

If you lack in any of the traits mentioned before, it doesn’t mean that you can’t get there and be successful. Anyone can be decisive. It just takes some practice and dedication.

Additionally, you may already have some of these character traits deep down. Studies show that people aren’t always true to their character traits and that factors can change which characteristics are used.

To become more decisive, you can take the following actions:

Since everyone wants to be successful, developing habits of successful people is essential. One way to do this is by learning about the shared traits of decisive people.

There is no definite answer to how or what success is to each person. The traits of these decisive people tend to be similar, however. So, if you are after success or are just looking to be more authoritative, emulating these character traits can help.