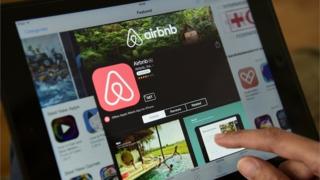 The commissions the company earns in the UK are booked by its Irish subsidiary, but it also has two UK subsidiaries.

One unit made a pre-tax profit, but the other did not incur UK corporation tax because deductions resulted in a loss.

Airbnb said in a statement: "We follow the rules and pay all the tax we owe."

One of the British subsidiaries, Airbnb Payments UK, handles payments between landlords and travellers for countries other than the United States, China and India.

The other British subsidiary, Airbnb UK, markets the website and app to British consumers. It reported a £463,000 pre-tax profit last year but because it gave shares to staff, which are tax-deductable, there was no corporation tax bill.

Airbnb said: "Our UK office provides marketing services and pays all applicable taxes, including VAT. The Airbnb model is unique and boosted the UK economy by £3.46bn last year alone."

The tax arrangements of other technology giants have come under under closer scrutiny in recent years.

One of the most vocal critics has been EU competition commissioner Margrethe Vestager. She has taken aim at the likes of Apple, Amazon and others for where they book the revenues and profits of their European activities.

Bruno Le Maire, the French finance minister, has also asked why Airbnb paid tens of thousand of euros in French corporation tax despite a turnover in the millions.

The company, founded in San Francisco in 2008, has disrupted the hotel industry by linking travellers with landlords who generally want to rent out a spare room or an entire property for short-term stays.

It has become one of the most successful examples of the digital economy, with an estimated value of about $24bn.

However, Airbnb has faced a growing backlash in cities including Barcelona, Berlin and Paris, where politicians have taken steps to stop landlords renting properties to tourists rather than local residents.

While Airbnb has long been linked with a stock market listing, it remains privately owned.

It takes a 3% commission from landlords for each booking, and also charges fees to travellers.

In the UK last year Airbnb catered for 5.9m travellers and had 168,000 listings.