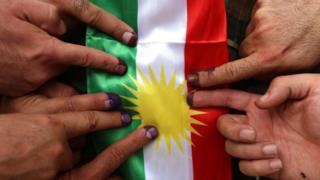 An Iraqi federal court has ordered the arrest of Kurdistan officials involved in overseeing a referendum last month on the region's independence.

On Wednesday, the Rusafa court said "legal measures" would be taken through the office of the public prosecutor against those Kurdistan officials it said were involved in supervising the vote.

A spokesman for the court, Abdulstar Bayraqdar, said the warrants followed a lawsuit filed by the country's National Security Council which argued that the referendum was "contrary to the decision of the high federal court".

Following the vote on 25 September, Kurdish officials said 2.8 million people living in the three provinces that form the Kurdistan Region, as well as "areas of Kurdistan outside the region's administration", had voted in favour of independence.

Kurdish leaders said the "Yes" result provided them with a mandate to start negotiations on secession with the central government in Baghdad and neighbouring countries.

However Mr Abadi has called for the referendum, in which 92% of voters backed secession, to be annulled.

Kurds are the fourth-largest ethnic group in the Middle East but they have never obtained a permanent nation state.

In Iraq, where they make up an estimated 15-20% of the population of 37 million, Kurds faced decades of repression before they acquired autonomy in 1991.

IcetruckOctober 11, 2017
Like story:
tweet
8 Tricks All Attractive Women Use To Make Men Think About Them
Deadly ‘supercell’ storm scatters ships in South Africa