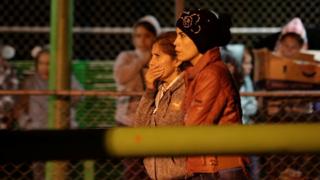 Thirteen people have been killed in a riot at a Mexican jail, authorities in the northern state of Nuevo Leon say.

Eight others were severely injured in the disturbance at Cadereyta prison. Local media report that 250 inmates battled security forces.

A spokesman for the state government said lethal force had been used to regain full control of the facility.

It is the latest in a string of bloody clashes in Mexico's jails, which are often dominated by drugs gangs.

Tensions also rose outside the jail, near Monterrey, as prisoners' friends and relatives clashed with police.

Many anxiously awaited news, banging on the side of vans which left the site carrying the injured.

Black smoke was seen rising over the facility and helicopters were sent to dampen the flames.

One inmate died in the initial fire.