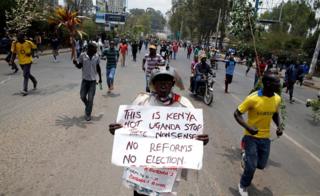 Interior Minister Fred Matiang'i said the ban was aimed at protecting Kenyans and their property.

Opposition supporters have been holding regular protests in the three cities, which have resulted in looting and violent clashes with police.

They are pushing for electoral changes before a fresh election is held.

Opposition leader Raila Odinga pulled out of the 26 October poll earlier this week.

The Supreme Court had annulled President Uhuru Kenyatta's win in the August election, after it found that the election commission had not followed the constitution and the electoral laws.

Mr Matiang'i said the ban was not meant to curtail the constitutional right to demonstrate but that it was agreed on after security authorities found that there was "imminent danger".

He told a press briefing that he had received complaints from the business community about the negative effects the protests were having on their businesses.

"We cannot go on this way. It is unfortunate to see people's cars being smashed, property being destroyed in the guise of a peaceful demonstrations. We must respect the law," he said.

He also said that a top official of the opposition coalition, Nasa, would be held responsible for damages caused during Wednesday's protests.

Mr Odinga withdrew his participation in the re-run election because he said the election commission had refused to implement changes to correct the problems he blames for the bungled election.

Nasa has called on its supporters to hold regular street protects to pressure the commission to agree to its demands.