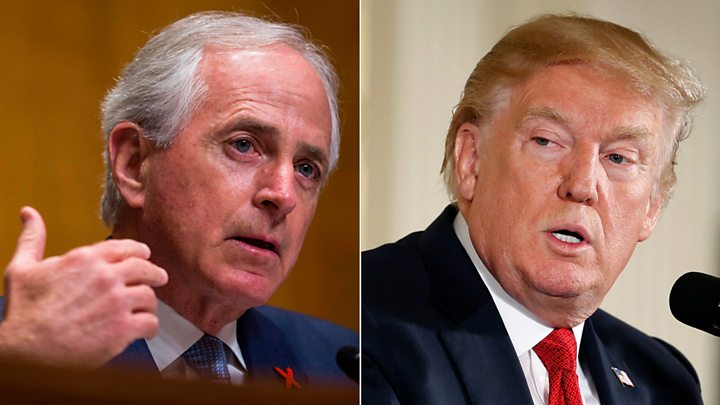 In a series of television interviews, Mr Corker accused the president of lying, adding that he debased the US and weakened its global standing.

Mr Trump fired back on Twitter, calling the Tennessee senator a "lightweight" who "couldn't get re-elected".

The pair met at a Senate lunch on Tuesday to discuss tax reform.

"He is purposely breaking down relationships we have around the world that had been useful to our nation," Mr Corker said on CNN after the Republican president criticised him on Twitter.

"I think the debasement of our nation is what he'll be remembered most for," he said.

The Foreign Relations Committee chairman, who was an early supporter of Mr Trump, added that the president has "great difficulty with truth".

The good news for Donald Trump is he's managed to push his feud with a grieving war widow out of the headlines. The bad news is he's done it by pushing a stake through Republican unity at a time when the party needs to come together to pass big-ticket tax reform through Congress.

The latest blistering exchange between Republican Senator Bob Corker and the president has all the hallmarks of one of Mr Trump's classic intra-party campaign spats.

Republicans – including those who bore the brunt of Mr Trump's vitriolic attacks – largely shrugged off those earlier rows as primary-season posturing and unified behind their unlikely standard-bearer in the autumn general election.

Mr Corker, on the verge of Senate retirement, isn't backing down, however. And the president is once again raising the voltage.

The party is learning the hard way that there's only one Donald Trump – whether he's a real-estate mogul, a reality TV star, a candidate or a president.

If you question his leadership, his views or his attitude, he'll unleash the whirlwind, no matter the consequences.

When asked if he regretted supporting Mr Trump during the 2016 election, the senator said: "Let's just put it this way, I would not do that again."

His comments came after Mr Trump lashed out at the Republican in a series of tweets.

Last month Mr Corker announced that he would not seek re-election at next year's mid-term elections.

Mr Corker had voted against the 2015 agreement to curb Iran's development of nuclear weapons, calling it "flawed", but later said Mr Trump should not "tear up" the pact.

Mr Trump's tweets on Tuesday appeared to be in response to Mr Corker's comments on ABC News' Good Morning America, in which he suggested the president should stop interfering in the debate on tax legislation.

The president went to Capitol Hill on Tuesday in an attempt to rally Senate Republicans around a White House-backed tax reform plan.

A protester was detained by police after he hurled Russian flags at Mr Trump as he walked through the building with top Senate Republican Mitch McConnell.

"Trump is treason!" shouted the demonstrator, who identified himself as Ryan Clayton from Americans Take Action, a campaign group calling for Mr Trump's impeachment.

"This president conspired with agents of the Russian government to steal an election!" he cried. "We should be talking about treason in congress, not about tax cuts!"

Mr Corker's support for the tax plan could be crucial as Republicans seek to pass the legislation in the upper chamber.

The lawmaker also raised concern with the president's behaviour toward North Korea, saying Mr Trump "continues to kneecap his diplomatic representative, the secretary of state".

He added that when it comes to diplomacy with Pyongyang, Mr Trump should "leave it to the professionals for a while".

The spat reignites an ongoing feud between the two men, which blew up earlier this month when Mr Corker responded to an attack from Mr Trump saying: "It's a shame the White House has become an adult day care center.

"Someone obviously missed their shift this morning."