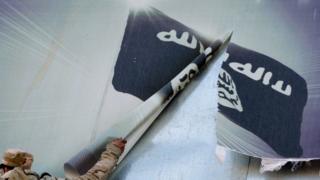 At least 5,600 supporters of so-called Islamic State (IS) have returned to their home countries as it loses ground in Iraq and Syria, a new report says.

The Soufan Center, a US-based think tank, says 33 states have reported arrivals in the past two years.

The figure includes half of the estimated 850 people who left the UK.

The report says the returnees – most of whom are imprisoned or disappear from view – will continue to present a security challenge for years to come.

IS has lost much of the territory that once made up the "caliphate" it proclaimed in June 2014, attracting thousands of jihadists from across the world.

The Soufan Center's report says the flow of foreign fighters came to a virtual standstill in late 2015, as IS began to suffer defeats and states implemented better measures to prevent travel.

The recovery of data following the fall of IS administrative centres such as Raqqa has helped confirm the identities of 19,000 of the more than 40,000 foreigners from 110 countries estimated to have flocked to Iraq and Syria to join the jihadist group.

The data does not, however, reveal what has happened to them.

Citing figures provided by the authorities in 33 countries, the Soufan Center says at least 5,600 foreign fighters are now believed to have returned home.

Added to the unknown numbers from other countries, this represents a huge challenge for security and law enforcement entities, according to the report.

"Although there is disagreement over the threat that returning foreign fighters may present to their countries of residence or origin, or to other countries they pass through, it is inevitable that some will remain committed to the form of violent 'jihad'," it says.

The report warns that as the territorial "caliphate" shrinks and is increasingly denied an overt presence, the IS leadership is highly likely to look to supporters overseas, including returnees, to "keep the brand alive".

"Returnees may be particularly vulnerable to contact from people who were part of the network that recruited them, or appeals for help from ex-comrades in arms."

Returnee women and children represent a particular problem, as states struggle to understand how best to reintegrate them, the report adds. Proper mental health and social support mechanisms will be especially relevant for children.

The Soufan Center noted that Tunisia's government had revised down the number of Tunisians believed to have joined IS from 6,000 in 2015 to 2,920. That change meant Russia was the home of the most foreign fighters.

The head of the UK Security Service, MI5, told the BBC last week that fewer than expected of the 800 Britons who joined IS had returned recently and that at least 130 had been killed.

Those who were still in Syria and Iraq might not now attempt to come back because they knew they might be arrested, Andrew Parker said.