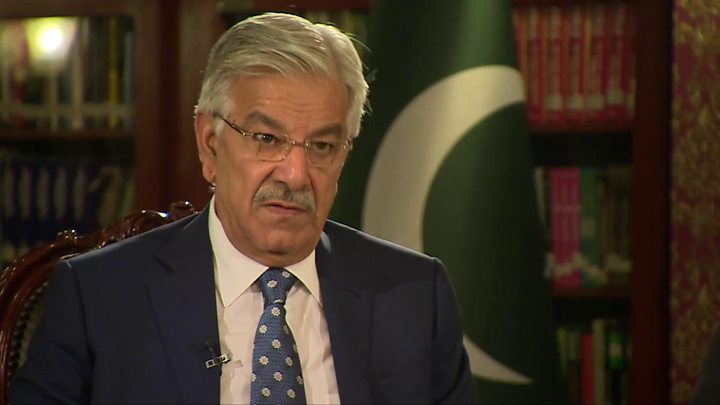 Pakistani Foreign Minister Khawaja Asif has told the BBC there is a "huge trust deficit" between his country and the US over the conflict in Afghanistan.

Mr Asif was speaking after meeting US Secretary of State Rex Tillerson.

He is the first senior US official to visit Pakistan after President Trump accused the country of providing "safe havens" to the Taliban.

Mr Tillerson repeated Mr Trump's call for Pakistan to do more to eradicate militant groups within its territory.

But Mr Asif insisted that there are no "safe havens" in Pakistan.

"They do not need our territory any more. Almost 40% of Afghan territory is now under the direct control of the Taliban."

US military sources suggest the Taliban control about 10% of Afghanistan and contest some 30% of the country.

US and Afghan officials believe the militants are able to use sanctuaries across the border in Pakistan to plan attacks in Afghanistan.

Some have alleged that the ISI – Pakistan's intelligence service – even collaborates with Afghan militants.

But Mr Asif blamed the "ineptitude" of American and international forces in Afghanistan for not ending the conflict.

He dismissed the possibility of economic sanctions being levelled against Pakistan by the US if his country is not deemed to be doing enough to tackle the Taliban.

Pakistan only received "a trickle" of economic assistance from the US, he said.

"We do not get any military hardware from them. We are not like in the past when we were their proxy.

"Having said that there is a willingness on both sides to bridge this [trust] deficit."