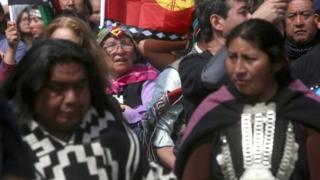 A court in Chile has absolved 11 members of the Mapuche indigenous community accused of an arson attack that killed a landowner and his wife in 2013 in the southern Araucania region.

The judges said there was insufficient evidence.

The landowner, Bernard Luchsinger and his wife, Vivianne McKay had been involved in a land dispute with the Mapuche.

Tensions between the Mapuche and the state have increased in recent years.

Eyewitnesses had said that a group of masked men attacked the house of Mr Luchsinger and his wife. Their charred bodies were later identified by relatives.

Last month eight Mapuche appeared in court in the southern city of Temucho after they were arrested on suspicion of taking part in arson attacks.

Police say they were involved in the burning of more than 50 trucks in two separate attacks on local companies in August.

A radical Mapuche group claimed responsibility and called for the release from jail of Mapuche prisoners who are being held under a controversial terrorism law.

Relations have been hostile since the Chilean army invaded their disputed homeland in a brutal campaign in the 1800s.