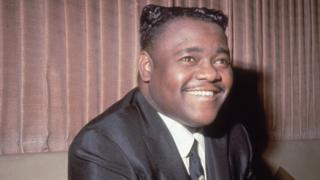 Fats Domino, one of the most influential rock and roll performers of the 1950s and 60s, has died aged 89.

The American rock and roll artist was best known for his songs Ain't That A Shame and Blueberry Hill.

His million-selling debut single, The Fat Man, is credited by some as the first ever rock and roll record.

An official from New Orleans coroner's office confirmed the death, which was earlier announced by Domino's daughter to a local television station.

Fats Domino was one of the first rhythm and blues artists to gain popularity with a white audience and his music was most prolific in the 1950s.

Domino's music has been credited as a key influence on artists during the 1960s and 70s. Elvis Presley introduced Fats at one of his Las Vegas concerts by saying "this gentleman was a huge influence on me when I started out".

In 1986 he was among the first inductees into the Rock and Roll Hall of Fame, but by his later life Domino would no longer leave New Orleans – even to accept the award.

New Orleans-born musician and actor Harry Connick Jr is among those who have paid tribute to Domino on Twitter, saying he had "helped pave the way for New Orleans piano players".

RIP fats domino… you helped pave the way for new orleans piano players… see you on top of that blueberry hill in the sky ❤️????????❤️

KT Tunstall thanked the pioneering artist for being an inspiration:

Thank you Fats Domino, you were an amazing music teacher on your records ❤️#RIP

And Samuel L Jackson paid tribute citing the lyrics of one of Domino's best loved songs:

I found My Thrill on " Blueberry Hill"! RIP Fats Domino

Fats Domino: A life in music

Antoine "Fats" Domino Jr was born in New Orleans on 26 Feb 1928, the son of a violinist. His parents were of Creole origin, and French Creole was spoken in the family.

He was musically inclined from an early age and learned piano from his brother in law, the jazz banjo player, Harrison Verrett.

He was given his nickname by bandleader Bill Diamond for whom he was playing piano in honky-tonks as a teenager. He said the youngster's technique reminded him of two other great piano players, Fats Waller and Fats Pichon.

Domino left school at the age of 14 to work in a bedspring factory by day, and play in bars by night. He was soon accompanying such New Orleans luminaries as Professor Longhair and Amos Milburn.