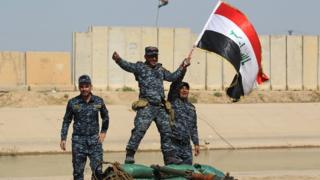 The Kurdistan Regional Government has offered to freeze the results of a recent disputed independence referendum and enter dialogue with Baghdad.

The government said in a statement that it proposed a ceasefire "in order to prevent further violence and clashes".

Last week fighting broke out when Iraqi government forces seized the oil-rich city of Kirkuk and other areas controlled by the Kurds.

It follows a Kurdish vote on the region's independence from Baghdad.

"Continued fighting does not lead any side to victory, but it will drive the country towards disarray and chaos," the government statement adds.

"Attacks and confrontations between Iraqi and Peshmerga forces that started on 16 October … could lead to a continuous bloodshed," it reads.

The Iraqi government regards the Kurdish vote for independence as illegal and has called for dialogue to resolve the crisis.

He said the vote was a threat to the "peaceful co-existence among Iraqis, and is a danger to the region", adding that he would "impose Iraq's rule" in the area.

People living in northern Iraq voted overwhelmingly in favour of independence for the Kurdistan Region in the controversial referendum.

The electoral commission said 92% of the 3.3 million Kurds and non-Kurds who cast their ballots supported secession.

Last week Iraqi forces took over swathes of territory held by the Kurds since 2014 and said they had wrested control of all areas of Kirkuk province from Kurdish Peshmerga fighters.

It was part of an operation launched by the army and allied militia which saw Kurdish forces pushed back into the officially recognised autonomous Kurdistan Region of Iraq (KRI).

IcetruckOctober 25, 2017
Like story:
tweet
Why You Should Never Skip Breakfast, According To Science
8 Habits That Make A Relationship Strong