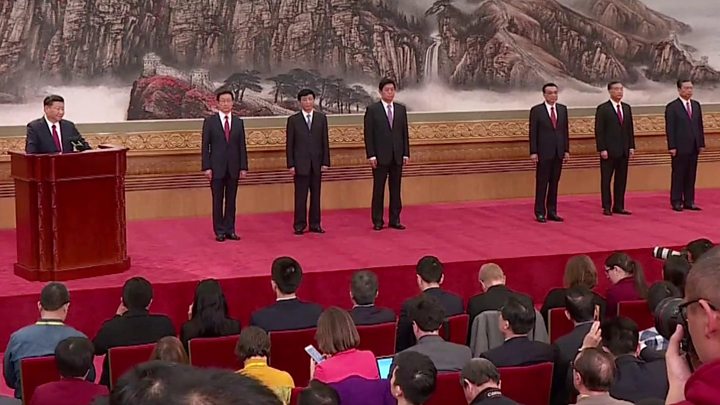 US President Donald Trump has congratulated Chinese leader Xi Jinping on his "extraordinary elevation" after this week's Communist Party congress.

Mr Trump also praised Mr Xi in a TV interview in the US, and said "some might call him king of China".

Mr Xi cemented his hold on China when he had a second five-year term confirmed, with no clear successor, at the congress.

His name and doctrine have been written into the party's constitution.

The two leaders are due to hold talks at a state visit to China next month, having met at the G20 summit in July.

In the phone call with Mr Trump, Mr Xi expressed a desire to work with the US president to "jointly blueprint future development of China-US ties", Chinese state media report.

Separately, Mr Trump praised Mr Xi as a "very good person" with whom he had "a very good relationship", in an interview with Fox Business Network.

China has the world's second-largest economy after the US, its biggest trading partner.

However, relations have been strained by Beijing's territorial disputes in the South China Sea and East China Sea with Washington's allies in East Asia.

The message "expressed the conviction that the relations between the two parties and the two countries would develop in the interests" of the Chinese and North Koreans.

It also officially acknowledged Mr Xi's political doctrine, noting that China had "entered the road of building socialism with Chinese characteristics in the new era".

On Wednesday, Mr Xi was formally handed a second term in office at the close of the Communist Party congress in Beijing.

He is now on a par with the founder of the state, Mao Zedong, and questions have been raised over whether the 64-year-old intends to rule beyond 2022.

There had been speculation Mr Xi would elevate his protégé Chen Miner and Guangdong party secretary Hu Chunhua, both of whom are in their 50s and young enough to be credible successors.

But the fact that the new appointees are all in their 60s, and likely to retire at the end of this five-year term, fuels speculation about Mr Xi's long-term intentions.

Russian President Vladimir Putin sent a telegram in which he said the re-election showed Mr Xi's "political authority" and the "broad support" his policy to develop China and strengthen its international position enjoyed.

South Korean President Moon Jae-in congratulated Mr Xi on his re-election in a letter, writing that he looked forward to creating a "practical strategic partnership".

Mr Xi has assumed an unprecedented number of positions since coming to power in 2012, including the title of "core" leader of China.

Officially no reason was given for barring the BBC, Financial Times, Economist, New York Times and Guardian, but unofficially journalists were told that their reporting was to blame – another sign of Xi's determination to control the message at home and abroad.