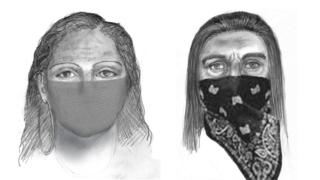 The FBI has released sketches of two women suspected of abducting a California mother last November while she was out running near her home.

Sherri Papini, 34, had been missing for three weeks when she was found at the side of a road last Thanksgiving.

A reward of $10,000 (£7,500) is being offered for information leading to the identification of her suspected captors.

Police say they are Hispanic and were last seen driving a dark-coloured SUV.

The motive behind Ms Papini's abduction in Redding, northern California, is still unclear.

She was reported missing by her husband Keith on 2 November after she failed to pick up their children from day care. He had found her mobile phone one mile (1.6km) from their home.

Ms Papini was discovered three weeks later at the side of a road in Yolo County, northern California.

She was battered and bruised and had restraints on her waist and wrists. Police said she had been branded with a "message" and her hair had been cut off.

Ms Papini told police she had been dropped off by one of her captors whom she described as a young Hispanic woman.

Shasta County Sheriff Tom Bosenko said the attacker was "a very sick person" who intended to "humiliate" and "wear down" Ms Papini.

In the latest update on the investigation, the Sheriff's office said male DNA was collected from the clothing Sherri Papini was wearing and female DNA was discovered on her body. Neither sample has been identified.

They also said a man from Michigan had been texting Ms Papini in the days before she disappeared and had agreed to meet her while he was in California. Police interviewed the man and cleared him of any involvement.

Ms Papini's husband has also been cleared of any involvement after he submitted to a polygraph, or lie detector, test.