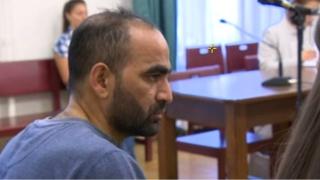 A Pakistani man wanted by Interpol in connection with alleged contract murders has been arrested in Hungary.

Authorities in Pakistan had issued an international warrant for his arrest in connection with 70 deaths there, listing him as the country's most-wanted person.

Police said he was caught in a group of migrants being smuggled to Austria.

The alleged professional gunman, aged 35, is said to be known as the "Pakistani Butcher".

He has only been identified with the initials A.Z.

The group he was travelling in was caught in Boly, 175 kilometres (110 miles), south of Budapest, the Austrian Federal Criminal Bureau said in a statement to AFP.

Boly is near Hungary's borders with Croatia and Serbia.

His extradition to Pakistan will be decided in the coming days.

"This case shows once again the importance of international networking in combating crime," said Austrian Interior Minister Wolfgang Sobotka in a statement.