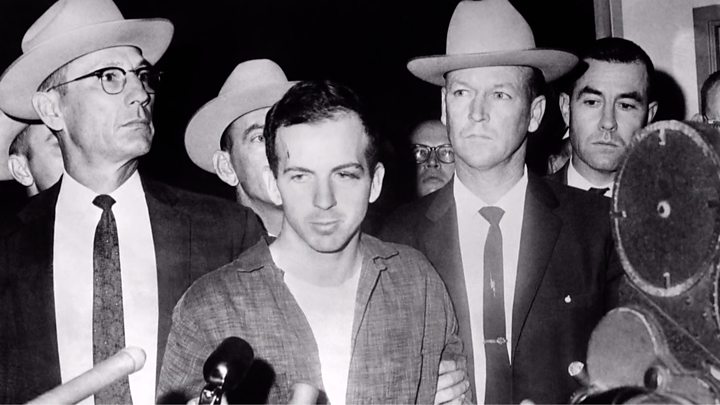 The US government has released 2,800 previously classified files on the assassination of President John F Kennedy in 1963.

President Donald Trump said the public deserved to be "fully informed" about the event, which has been the subject of numerous conspiracy theories.

But some documents have been withheld at the request of government agencies.

One memo revealed that the FBI had warned police of a death threat against the assassin Lee Harvey Oswald.

"We at once notified the chief of police and he assured us Oswald would be given sufficient protection", writes the FBI director J Edgar Hoover.

Oswald, a former Marine and self-proclaimed Marxist, was shot dead in the basement of the Dallas Police department two days after President Kennedy was killed.

Another memo showed that Soviet officials feared an "irresponsible general" would launch a missile at the USSR in the wake of President Kennedy's death.

One memo tells how a British regional newspaper, the Cambridge News, received an anonymous call about "some big news" in the US, minutes before the assassination.

President Kennedy was shot dead on 22 November 1963 as he travelled through Dallas in an open-topped limousine.

The Warren Commission's report into the shooting, published in September 1964, said that Lee Harvey Oswald had fired the fatal shots from the Texas School Book Depository building.

JFK Files: The most interesting points

There was "no evidence that either Lee Harvey Oswald or Jack Ruby was part of any conspiracy, domestic or foreign", the commission said.

A 1992 law passed by Congress required all records related to the assassination – around five million pages – to be publicly disclosed in full within 25 years.

The deadline was Thursday.

More than 90% of the files were already in the public domain.

The long anticipated release of the #JFKFiles will take place tomorrow. So interesting!

Allegations of a government cover-up are unlikely to be assuaged by reports that the CIA, FBI, Department of State and other agencies lobbied at the last minute to keep certain documents under wraps.

In a memo directing heads of executive departments to release the files, Mr Trump said the American public deserves to be "fully informed about all aspects of this pivotal event".

"Therefore, I am ordering today that the veil finally be lifted," the president wrote.

Some redacted documents are undergoing a further six-month review, but it is possible those records could stay secret after the deadline on 26 April next year.

The president, according to White House officials, was reluctant to agree to agency requests to hold the remaining documents.

"I have no choice – today – but to accept those redactions rather than allow potentially irreversible harm to our Nation's security," Mr Trump added in his memo.

The records have been released on the National Archives website.