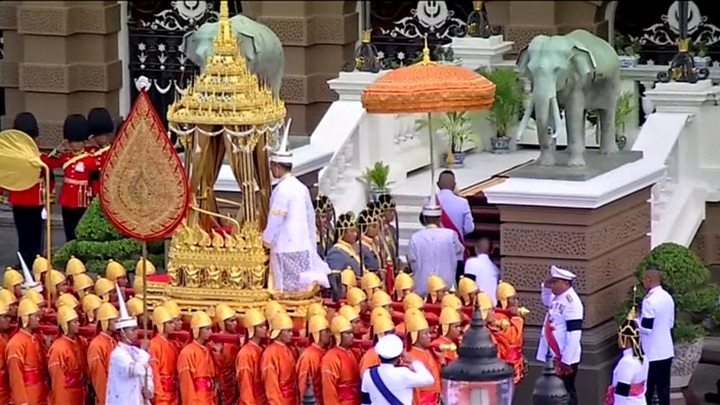 The final stage of the funeral ceremony for Thailand's late King Bhumibol Adulyadej has taken place in Bangkok.

The king's ashes were enshrined in two royal temples and Thailand's Grand Palace, where he had lain in state since he died aged 88 last October.

On Thursday, hundreds of thousands of people lined the streets to pay their last respects to King Bhumibol, who reigned for more than 70 years.

A year-long mourning period ended at midnight (17:00 GMT) on Sunday.

It means mourners will now be able to replace their black clothes with more subdued colours, such as brown and blue. Black and white decorations on government offices and homes can also be removed.

The elaborate five-day funeral officially started on Wednesday with a merit-making ceremony, a Buddhist rite, in the Grand Palace in Bangkok.

On Thursday, the late king was cremated on a royal pyre lit by his son, King Maha Vajiralongkorn, after a procession marked by drums, flute music and an artillery salute.

In the final ceremonies, King Vajiralongkorn selected some of his father's ashes to be enshrined in the Grand Palace.

Anxiety over the future

In his 70 years on the throne King Bhumibol came to be viewed as a divine figure, a reserved, thoughtful man whose quiet leadership was credited with helping Thailand avoid the conflicts that afflicted neighbouring countries.

In the last decade of his reign, Thailand became bitterly polarised between two rival political camps, one aligning itself closely with the palace.

A military coup three years ago froze the political conflict and the generals gave themselves the task of supervising a historic and delicate royal transition.

This funeral brings that transition to an end, and there is a good deal of anxiety about what will happen when political activity is permitted again, under an untested and very different monarch in King Vajiralongkorn.

The late king was seen as a stabilising figure in a country hit by cycles of political turmoil and multiple coups.

Preparations for this week's events took almost a year and included setting up the large cremation complex near the palace.

The funeral site features sculptures of mythical creatures and auspicious animals such as lions and elephants.