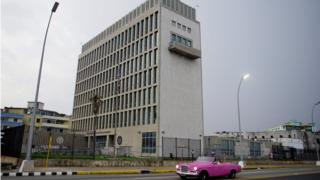 Cuba says there have been no sonic attacks against US embassy staff in its capital, Havana, and that the claims are a "political manipulation" aimed at damaging bilateral relations.

The US said nearly two dozen personnel had health problems after the alleged attacks and cut its staff as a result.

Reports suggest sonic attacks were to blame, but nothing has been proven.

Washington has not blamed Havana for the alleged attacks, and the Cuban government has previously denied targeting embassy staff.

The US expelled 15 Cuban diplomats, saying that Havana had failed to protect its employees, but Cuba said the move was "unjustified".

The US government also suspended visa processing in Cuba indefinitely.

Speaking in Washington at a meeting of Cubans living in the US, Mr Rodriguez said the allegations have caused a "serious deterioration in the relationship between both governments and both countries".

"It's unacceptable and immoral, from the point of view of the Cuban government, for people to be harmed by a difference between governments," he added.

The reported health problems ranged from mild brain trauma and deafness to dizziness and nausea.

Late 2016: US embassy staff and at least one Canadian began to notice symptoms

May 2017: US expels two Cuban diplomats for failing to protect its diplomats

August: US says 16 employees have been treated but attacks seem to have stopped. A Canadian diplomat in Havana is treated for hearing loss.

Early September: US says attacks are continuing and 19 staff members have now been hurt