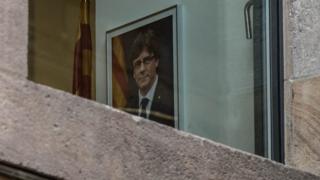 Sacked Catalan President Carles Puigdemont has gone to Belgium, a lawyer he has hired there says.

The lawyer, Paul Bekaert, said he had not gone into hiding and did not confirm whether he would seek asylum.

Spain's chief prosecutor has called for rebellion charges to be brought against him and other organisers of Catalonia's banned independence referendum.

It suspended the region's autonomy and called for fresh elections after Mr Puigdemont and his government declared independence last week.

On Tuesday, Spain's Guardia Civil – a paramilitary force charged with police duties – raided the offices of the Catalan police force.

What is Mr Puigdemont doing in Belgium?

"He has full rights to be here, there is nothing against him at this moment," he told Flemish public radio.

Asked whether the Catalan leader was planning to seek asylum in Belgium he added: "We're keeping all options open – nothing has been decided."

Theo Francken, Belgium's immigration minister, said over the weekend that an asylum application was "not unrealistic" but Prime Minister Charles Michel later said it was "absolutely not on the agenda".

Mr Francken, a member of the separatist New Flemish Alliance (N-VA) party, said last week that Catalan ministers could apply for political asylum in Belgium, adding that he had doubts over whether Mr Puigdemont and others would get a fair trial in Spain.

Political commentators in Belgium have suggested that Mr Francken's earlier comments could be seen as an invitation to former Catalan members of parliament to seek asylum in the country.

On Monday Spanish media reported that Mr Puigdemont had met Flemish politicians in Brussels. The TV station La Sexta reported (in Spanish) that he was there with five of his sacked government's ministers:

If found guilty of rebellion, Mr Puigdemont could face a jail term of up to 30 years.

Under the Spanish legal system, Mr Maza's requests will be considered by a judge.

What is the situation in Catalonia?

The working day on Monday passed off peacefully, despite some Catalan officials defying instructions from Madrid not to turn up.

Madrid's temporary move to impose direct control by invoking Article 155 of the constitution – a first for Spain – will see as many as 150 of the region's top officials replaced.

Mr Puigdemont and his vice-president Oriol Junqueras reject the central government's moves, arguing that they can only be removed from office by the citizens of Catalonia.

What's next for Catalan autonomy?

Madrid has called for fresh regional elections on 21 December.

A spokeswoman for Mr Puigdemont's PDeCAT party said it would field candidates "with conviction". The ex-president could run in new elections if he has not been jailed by then, according to Spain's Foreign Minister Alfonso Dastis.

On Monday, Mr Dastis said he hoped the forthcoming elections would help to "restore legal governance and rule of law in Catalonia".

Spain has been gripped by a constitutional crisis since a referendum, organised by Mr Puigdemont's separatist government, was held on 1 October in defiance of a constitutional court ruling that had declared it illegal.

Spanish Prime Minister Mariano Rajoy then announced the dissolution of the regional parliament and the removal of Mr Puigdemont as Catalan leader.

Before this, the region had one of the greatest levels of self-government in Spain.

It has its own parliament, police force and public broadcaster, as well as a government and president.