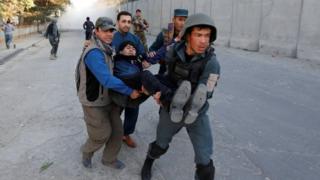 At least four people have been killed and 13 injured in a suicide attack in central Kabul, Afghan officials say.

A spokesman for Kabul police told the BBC the bomber was thought to be as young as 12 or 13.

The so-called Islamic State has said it was behind the attack.

Ambulances have been ferrying victims of the blast in the capital's diplomatic zone to hospital. The number of dead and injured is expected to rise.

"I was 100 metres away when the explosion happened and as I ran towards the site I saw several people lying in blood – one had been hit in the head and was moving. It was a horrible scene," one witness told Afghanistan's Tolo news.

Kabul has been targeted by the Taliban and other militants on many occasions in recent months.

In May a huge bomb in the capital's so-called Green Zone – where many diplomatic missions are based – left more than 150 people dead.

It was the deadliest suicide attack by insurgents in Afghanistan since the Taliban were driven from power by US-led forces in 2001.

Security was tightened in response to the May blast, which happened near the German embassy. But the truck scanners, barriers, and checkpoints did not stop the latest attack on Kabul's diplomatic quarter.