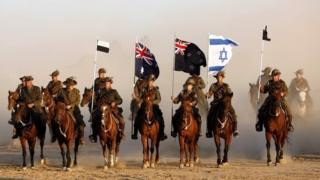 Israeli, Australian and New Zealand leaders have commemorated the 100-year anniversary of the Battle of Beersheba.

The World War One battle in what is now southern Israel is considered a key moment in the Allies' efforts to break the Turkish line and capture Jerusalem.

Australian PM Malcolm Turnbull described it as "part of our history".

To mark the occasion, about 100 Australian horsemen took part in a small-scale recreation of the battle's defining charge though the desert.

On 31 October 1917, Australian and New Zealand cavalry galloped towards to the Turkish trenches and seized control of the city, a strategic crossroads and important water source.

"Exactly 100 years ago brave ANZAC [Australian and New Zealand Army Corps] soldiers liberated Beersheba for the sons and daughters of Abraham and opened the gateway for the Jewish people to re-enter the stage of history," he said.

The Battle of Beersheba led to the Balfour Declaration – the first time the British government endorsed the establishment of "a national home for the Jewish people" in Palestine.

While many Israelis believe it was the foundation stone of modern Israel and the salvation of the Jews, many Palestinians regard it as a betrayal.

Australian Prime Minister Malcolm Turnbull said the "the battle has become part of our history, part of our psyche".

"Had the Ottoman rule in Palestine and Syria not been overthrown by the Australians and the New Zealanders, the Balfour declaration would have been empty words," he added. "But this was a step for the creation of Israel."

New Zealand Governor-General Patsy Reddy said the Beersheba victory had boosted morale, and been a significant moment for her nation in an international context.

About 500 Turkish soldiers died in the battle, according to one military historian, Jonathan King.

It also claimed the lives of 31 Australians and eight New Zealanders.

The battle was considered one of the last great cavalry charges before sophisticated weaponry rendered horses obsolete in the military.