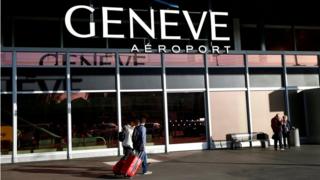 A runaway seven-year-old girl managed to board a flight out of Geneva Airport, despite not having a ticket.

She had escaped from her parents at Geneva's central station on Sunday and travelled by train to the airport, Geneva Airport said in a statement.

The child was able to slip through security checks by "taking advantage of her small size" and standing near adults, the airport said.

The airport said it was a "highly regrettable incident".

Geneva Airport, on the Swiss-France border, allows passengers to leave from either France or Switzerland.

Airport spokesman Bertrand Stämpfli said the girl had left from the French exit, boarding a flight destined for France.

During the initial security checks, she was thought to have been with the adults she stood alongside, he said. She was turned back by airport staff as she got closer to the departure gate, but managed to get on to the plane "by sneaking into a passage accessible only to a child of this size".

She was handed over to the police, who had tracked her to the airport via security videos, and reunited with her family.

Mr Stämpfli said the incident had exposed a flaw in airport procedures and steps were being taken to ensure it could not happen again.