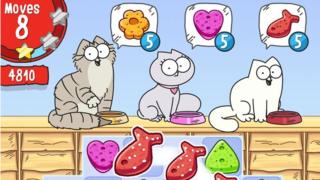 The UK's advertising watchdog has intervened after an adult advert was shown within a video game app popular with children.

The pop-up ad featured a "temporary tattoo" that looked like a deep bite mark, placed on a woman's shoulder.

The imagery appeared in the match-puzzle title Simon's Cat Crunch Time in July.

Wish.com, the retailer responsible for creating the ad, failed to respond to the complaint.

The Advertising Standards Authority (ASA) said it was concerned by the San Francisco-based company's lack of response and ordered the business to ensure its adverts were properly targeted in the future.

Although the body does not have the power to impose fines itself, it can refer repeat offenders to Trading Standards, which can take further action.

The game's publisher has also banned Wish.com from serving ads to its products in the future.

The Simon's Cat game has a Pegi 3 rating – meaning it has been judged to be suitable for anyone above the age of three – and has been installed more than one million times on Android and iOS devices.

As with many titles, adverts are automatically placed within the software by algorithms, which are supposed to screen out adult content.

The publisher, Strawdog Studios, told the ASA that it also had the power to remove ads manually.

But it added that it relied on customer reports to flag unsuitable content, and had not been alerted to the tattoo image before the watchdog had become involved.

"We noted that it was not clear from the ad that the product shown was a fake tattoo and we considered that the image… which was red and bloody, might cause distress."

The authority added that Wish.com was obliged to ensure the ad was not promoted again in an untargeted manner.

The company – which describes itself as the world's sixth biggest e-commerce business – sent an automated response to the BBC when asked for comment but has yet to address the problem.

"The ASA has a growing problem with non-UK online businesses, who will sometimes take the view that a self-regulatory body can be ignored," said Andy Milmore, a partner at the law firm Harbottle & Lewis.

"This is especially so where the complaints relate to 'inappropriate' marketing, where the ultimate backstop of enforcement action under criminal statute is unlikely to apply."