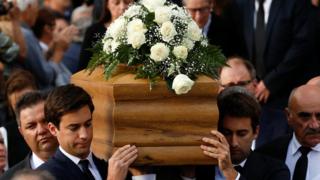 Dozens of people in Malta have gathered for the funeral of an investigative journalist killed by a car bomb attack that shocked the country last month.

The crowd applauded when the coffin with Daphne Caruana Galizia arrived at the church in Mosta for the service.

Her family barred Malta's leaders from attending the ceremony. The EU executive has urged the authorities to find the "barbarous" assassins.

Friday has been declared a day of mourning and flags are flying at half-mast to mark the day.

Outside the church, they were calls for "justice" and the crowd held their hands up in a "V" gesture symbolizing peace, the Times of Malta reports.

International experts, including from the FBI, are helping in the investigations but no arrests have been made so far. The government has offered a €1m (£890,000; $1.2m) reward for information about her murder on 16 October.

President Marie-Louise Coleiro Preca's office said she was told via a third party that her presence in the ceremony "was not desired" by the journalist's family.

And a spokesman for Prime Minister Joseph Muscat said: "The family has made it widely known that it does not wish the state authorities to attend."

Ms Galizia was a harsh critic of the government and effectively triggered an early election this year by publishing allegations linking Mr Muscat to the Panama Papers scandal.

Mr Muscat and his wife denied claims they used secret offshore bank accounts to hide payments from Azerbaijan's ruling family – and he was returned to power in the election, despite the controversy.

The journalist's sons have called for him to step down over her killing.

The editors of eight of the world's largest news organisations, including the BBC, called for the European Commission – the EU executive – to investigate the murder.

In response, Frans Timmermans, vice president of the Commission, urged authorities to leave "no stone unturned" in the case.

"The eyes of Europe are on the Maltese authorities," he said in a statement.

"We want the investigations to run their full course, so that any other related wrong-doings that may emerge can also be prosecuted and potential structural problems be resolved."

The president of the European Parliament, Antonio Tajani, is expected to attend the funeral.