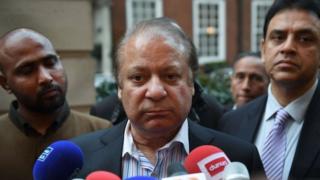 He and some of his family members are facing charges relating to their ownership of properties in London.

They deny any wrongdoing, while their supporters say the cases are a political vendetta.

Mr Sharif, 67, resigned as prime minister in July after the country's Supreme Court disqualified him over undeclared income.

The court also ordered the National Accountability Bureau to investigate and conduct a trial into the Sharif family's wider finances.

Mr Sharif returned to Pakistan from London on Thursday after weeks of speculation. He had been staying in the UK capital while his wife underwent cancer treatment.

On Friday morning, the former prime minister, his daughter Maryam and his son-in-law appeared in Islamabad's accountability court. The proceedings are now under way.

Mr Sharif's first court appearance will be keenly watched both in Pakistan and abroad, the BBC's Anbarasan Ethirajan says.

They revealed that three of them owned offshore companies and assets not shown on his family's wealth statement.

The companies were allegedly used to channel funds to acquire foreign assets, including some apartments along Park Lane in London's Mayfair area.

Despite documents from the Panama Papers suggesting that the beneficial owner of the luxury central London flats was Mr Sharif's daughter Maryam, she later claimed that she was only a trustee – and that it was her brother who was the beneficial owner.

To prove her point, Maryam Nawaz produced a trust deed signed by both her and her brother dated February 2006.

But a British forensic expert later said the document was "fake" or had been "falsified" because it was typed in the Calibri font, which was not commercially available until 2007.

The insinuation that the offshore companies were meant to hide or launder ill-gotten wealth or to avoid taxes called Mr Sharif's credentials into question.

Mr Sharif, who in July was serving as prime minister for a record third time, was less than a year away from becoming the first head of government in Pakistani history to complete a full term in office.