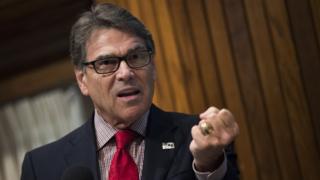 US Energy Secretary Rick Perry has said an increase in the use of fossil fuels in Africa may prevent sexual assault.

Speaking in Washington, he said "from the standpoint of sexual assault" light would shine "righteousness…on those types of acts".

Mr Perry also said electricity would stop people from reading by the light of fires, which have toxic fumes.

His comments have been criticised, with one environmental group describing them as "blatantly untrue".

Mr Perry, a known climate change sceptic, said on Thursday: "From the standpoint of sexual assault. When the lights are on, when you have light that shines, the righteousness, if you will, on those types of acts".

"So from the standpoint of how you really affect people's lives, fossil fuels is [sic] going to play a role in that", he added.

Mr Perry was discussing a recent trip to Africa at an event hosted by NBC News and Axios. He told journalists that he had met a young girl who said she read by the light of a fire.

"A young girl told me to my face, one of the reasons electricity is so important to me is not only because I'm not going to have to try and read by the light of a fire and have those fumes literally killing people", he said.

A spokeswoman for the Department of Energy told The Hill, a political news website, that the comments were intended to highlight the ways electricity will improve the lives of people in Africa.

"The secretary was making the important point that while many Americans take electricity for granted there are people in other countries who are impacted by their lack of electricity," Shaylyn Hynes said.

The comments have been criticised by environmental groups. The Sierra Club, which supports wind and solar power, described them as "blatantly untrue".

The group's director, Michael Brune, said in a statement: "To suggest that fossil fuel development will decrease sexual assault is not only blatantly untrue, it is an inexcusable attempt to minimise a serious and pervasive issue."

"Rick Perry's attempt to exploit this struggle to justify further dangerous fossil fuel development is unacceptable. He should resign from his position immediately before he causes any more damage."

Mr Perry, a former governor of Texas, became known for gaffes made during his 2012 bid for the US presidency.

He dropped out of the race after famously failing to recall the name of the agency he now heads, which he said he would abolish if elected.

As energy secretary, in July this year he was duped by Russian pranksters who made him believe he was speaking to the Ukrainian prime minister.