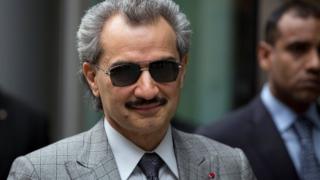 The heir to the throne in Saudi Arabia has consolidated his hold on power with a major purge of the kingdom's political and business leadership.

Prince Alwaleed bin Talal, a billionaire with investments in Twitter and Apple, is among those held.

The new anti-corruption committee has the power to issue arrest warrants and travel bans.

Attorney General Sheikh Saud al-Mojeb said the status of the detainees would not influence "the firm and fair application of justice", AFP news agency reports.

Saudi broadcaster Al-Arabiya said fresh investigations had been launched into the 2009 Jeddah floods and the outbreak of the Mers virus which emerged in Saudi Arabia in 2012 – but analysts see the detentions as a clear move by the crown prince to strengthen his power base.

A shock to Saudis unused to change

The events of Saturday night in Saudi Arabia are nothing short of seismic for that country. In a bold, pre-planned move, the 32-year old Crown Prince has removed the final obstacles to his gaining total control over the world's richest oil producer and home to the holiest shrines in Islam.

Presented to the world as an anti-corruption drive, the arrests of princes, ministers and the billionaire tycoon Prince Alwaleed bin Talal have shocked Saudis unused to sudden change.

The crown prince is largely popular, especially amongst young Saudis, but many older, more conservative citizens think he is moving too far too fast. He has started an unwinnable war in Yemen while still fighting the extremists of so-called Islamic State. He has also backed a damaging boycott of Gulf neighbour Qatar.

But his supporters hail his efforts to modernise Saudi Arabia and, after decades of rule by old men, they welcome a fresh vision from a man who could well be king for the next 50 years.

Who is Prince Alwaleed?

The owner of London's Savoy hotel is one of the richest men in the world, with a net worth of $17bn (£13bn) according to Forbes.

Shares in Kingdom Holding, the investment firm owned by the prince, plunged 9.9% in early trade on the Saudi stock market after news of his detention emerged.

The firm is one of Saudi Arabia's most important investors. Apart from Twitter and Apple, it has shares in Citigroup bank, the Four Seasons hotel chain and ride-sharing service Lyft.

The Saudi prince made the news in the past for employing women, who make up two-thirds of his staff.

But he was also known for his hundred-million-dollar desert resorts, where he employed dwarves for entertainment purposes.

Two years ago he offered luxury cars to fighter pilots participating in a bombing campaign in Yemen, where the Saudi-led coalition continues to bomb Houthi rebels, killing 26 people in an attack on a hotel and market on Wednesday.

Prince Alwaleed once bought control of a hotel and a yacht from Donald Trump, when he had yet to enter politics, but clashed with him publicly on Twitter in 2015 over his decision to stand for president, the New York Times notes.

Mr Trump, who was born into a family of property developers, shot back with a tweet mocking the source of the prince's wealth.

Who else was detained or sacked?

Prince Miteb, son of the late King Abdullah, was once seen as a contender for the throne and was the last member of Abdullah's branch of the family in the highest echelons of Saudi government.

Those reported to have been detained include:

Some of the detainees are being held at the Ritz-Carlton hotel in the diplomatic quarter of Riyadh, sources in contact with the government told Reuters news agency.

What do we know about Crown Prince Mohammed bin Salman?

Few people outside Saudi Arabia had heard of Prince Mohammed bin Salman before his father became king in 2015. But since then, the 32-year-old has become the most influential figure in the world's leading oil exporter

Last year, the crown prince unveiled a wide-ranging plan to bring social and economic change to the oil-dependent kingdom.

He recently said the return of "moderate Islam" was key to his plans to modernise Saudi Arabia.

Addressing an economic conference in Riyadh, he vowed to "eradicate the remnants of extremism very soon".

IcetruckNovember 5, 2017
Like story:
tweet
Bodies of 26 migrants arrive in Italy as rescues intensify
Trump pledges US resolve on Japan leg of Asia tour