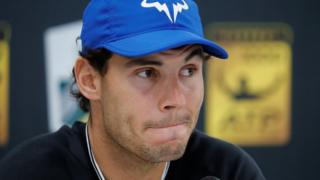 Rafael Nadal not recognised by guard at Paris Masters

Rafael Nadal, one of the world's most famous tennis players, has had an awkward moment at the entrance to the Paris Masters courts.

A guard initially failed to recognise him and refused to allow him in.

"Hello sir, have you got your pass?" the security guard asked the world's number one tennis player, and a surprised Nadal responded: "I don't have it with me."

The guard asked Nadal who he was and got the famous name in response.

The Spaniard was then immediately allowed through to the training courts.

The awkward moment was captured by French Canal+ Sport TV.

Nadal later pulled out from the tournament with a knee injury before facing Serbian player Filip Krajinovic in the quarter-finals on Friday.

In the finale of the Paris Masters on Sunday, American player Jack Sock won his first Masters 1000 title after beating qualifier Krajinovic.

Nadal, 31, widely regarded as one of the greatest tennis players in history, has won 16 grand slams, two Olympic gold medals, and four Davis Cups with the Spanish national team.