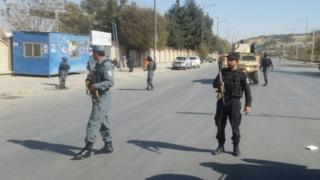 Gunmen have attacked a local television station in the Afghan capital Kabul, with a number of casualties feared.

The attackers threw grenades and fired guns as they entered the Shamshad TV headquarters, witnesses say.

A reporter who managed to escape told the BBC the attackers were still inside the building with gunfire being heard.

More than 100 employees are thought to be inside the building. It is not clear who was behind the attack but the Taliban has denied involvement.

The number of attackers and people killed and injured remains unclear, police say.

'I managed to escape'

A spokesman for the chief of Kabul police said one of the attackers had been killed by Afghan forces. Security personnel are trying to regain control of the building.

Shamshad TV quickly went off air after the attack began.

"Some of my colleagues were killed and injured. I managed to escape," Hashmat Istankzai, a reporter for the Pashto-language channel, told the BBC.

Kabul has been targeted repeatedly in recent months by the Taliban and so-called Islamic State militants.

IcetruckNovember 7, 2017
Like story:
tweet
Trump says extreme vetting for Texas shooter would have made ‘no difference’
WATCH: How to protect your smartphone from fake apps